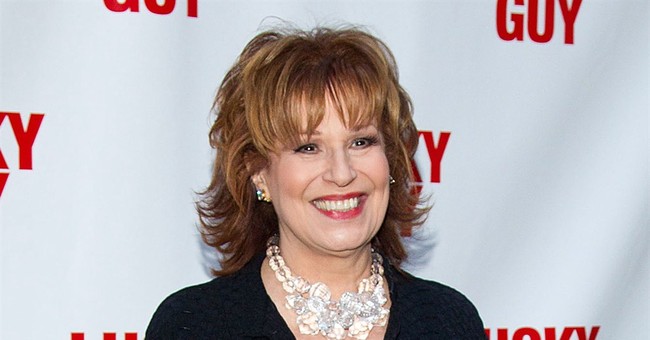 What will happen once black Americans possess firearms? Joy Behar has an idea.

On Wednesday’s installment of The View, the group got a grip on gun control. Or tried.

Co-host Sara Haines brought up a discussion held Tuesday with Democrat Connecticut Sen. Chris Murphy, which prompted Joy to set her sights on the GOP:

“[T]he Republican Party already has said, many of them, that taking those AR-15s off the market is a non-starter. It’s all about the guns, alright?”

“Can I just say this, real quick, as a gun owner? There are people in this country that genuinely own guns, and just do so for the same reason…”

“Let me give you a story. There’s a man in Connecticut that watched his neighbor have a home invasion and watched their whole family get killed. He built his own AR-15 because Connecticut won’t let you buy them, but you can abide by rules that allow you to build them. And then he has one in his house to protect his family, because he never wants to see that happen again. He is a black man. … So that’s all I’m saying: They’re not these crazy people.”

They aren’t? Such would surely come as news to many who gather their gun information from legacy news sources. Often, it seems those in favor of banning AR-15s know nothing about them. It also seems those are the people disseminating said information.

If I had to guess, if someone knowledgeable about guns were tied up in a small room at the hands of an irate criminal clutching a modern sporting rifle, they wouldn’t breathe a giant sigh of relief if the maniac switched to a Glock 19.

As surely most of you know, gun crimes largely come courtesy of handguns. According to FBI statistics, of 13,927 murders in 2019, 10,258 were perpetrated with firearms. Of those, handguns were responsible for 6,368; rifles were employed in only 364.

Yet, the war against the AR-15 — which is not, in fact, a weapon used by Americans in war — continues.

Moving on, Joy had an idea about the catalyst waiting to revamp Republicans where the 2nd Amendment is concerned:

“Here’s the thing: Once black people get guns in this country, the gun laws will change. Trust me.”

She reiterated, “Trust me on that. We’ll see some action.”

Concerning assertions — if I properly understand — her statements make one or more of the following:

In 2021, a National Firearms Survey reported on the demographics of American gun ownership:

So if Joy wants black Americans armed, her wish is granted — there are even more American gun owners than she evidently assumed.

As for the NRA one day discovering the same, they likely already know. Joy might be shocked to learn of Colion Noir, a popular online pro-2A advocate and former NRA TV man (Language Warning):

Furthermore, she should expect GOP legislators to get busy banning scissors — just as soon as black Americans get those. Of 2019’s nearly-14,000 murders, 1,476 — over four times the number of rifles — were committed with “knives or cutting instruments.”

And what’ll happen when black people obtain hammers? Republicans may drop the hammer: Blunt objects were utilized in 397 — still 33 more than rifles.

Or, perhaps, conservatives believe all Americans should have 2nd Amendment rights.

And just maybe — despite the perception of longtime hosts on The View — many of those conservatives are black.

On the Anniversary of George Floyd’s Death, a Professor Announces Property Is Racist

In Honor of America’s Heroes, Hollywood Star Chris Pratt Proves He’s Not Like the Rest