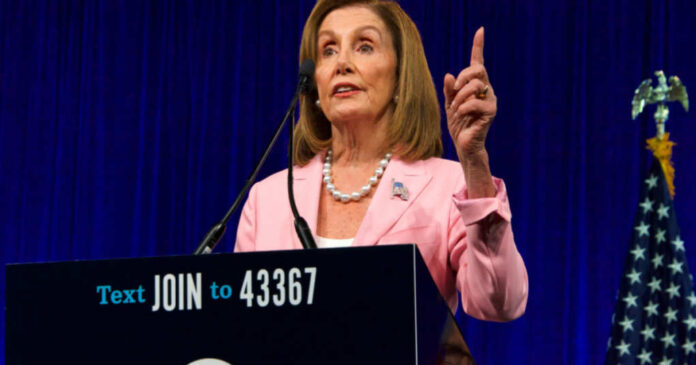 The moment that a politician talks about banning guns, it causes people to prickle. It is an infringement on our Second Amendment rights. Guns are not the problem – the mentally unstable and criminally insane are the problem. However, too many liberal politicians believe that the answer is to just remove the guns from everyone, including law-abiding citizens.

One of the loudest voices regarding banning guns is Nancy Pelosi, otherwise known as the Speaker of the House.

Either she knows something that we don’t…or she’s making promises that she won’t be able to keep.

Millions of Americans own guns and never kill a soul. The guns are used for home protection, as collector’s pieces, and for range practice. People use guns for skeet shooting, recreation, and peace of mind.

Some gun owners will never even remove the gun from their own property.

Yet, Nancy Pelosi and the other Democrats can’t fathom this idea. Guns are involved in mass shootings; therefore, guns are bad.

But still – Pelosi has a plan.

Last Wednesday, Pelosi spoke at a rally in San Francisco where Mayor London Breed was at her side. She promised everyone there that federal lawmakers would be passing measures that would slow gun violence down across the U.S.

“Next week, Congress will take up — and actually, tomorrow — the Judiciary Committee will be marking up a bill that does the following: raise the age to buy weapons of war, which is what we call some of these guns, from 18 to 21.”

She believes that because Texas recently lowered the age, that’s what allowed the 18-year-old to purchase a gun and commit mass murder at the elementary school in Uvalde.

Pelosi’s comments took place the same day that a shooter walked into a hospital in Tulsa, killing four people. That person had both a handgun and a rifle – and he was well over the age of 18.

Nancy Pelosi is making promises to the American public – and that can be a dangerous thing. What she wants to happen and what other members of Congress want to happen are very different.

As some members of the GOP have said, it should be more about providing security than simply stripping people of their rights to own guns.

There is bipartisan progress being made – including Republican senators Susan Collins and Lindsey Graham working with others to make a deal.

It’s clear that what comes from the House and the Senate will vary dramatically. The Senate is working more toward bipartisan deals. The House is focusing on a highly progressive overhaul of the Second Amendment. Pelosi and others within the Democratic Party have no desire to listen to what the right has to say. It means that her promises are empty. She forgets – bipartisanship is what will help to get a bill actually passed through both the House and the Senate.

That is unless she already knows that Biden has plans to sign an executive order. It wouldn’t be surprising. The man uses executive orders for everything else, why would gun control be any different?