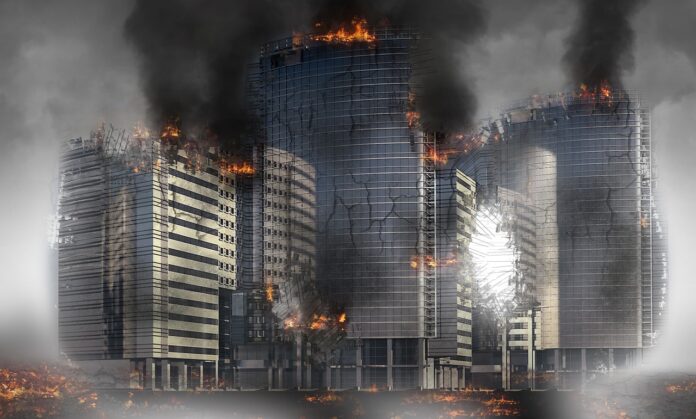 As heavy artillery fire continues raining down on the Gaza Strip, residents are trapped like hamsters in a cage. Israeli forces have been relentless with their constant and deadly barrage of missiles aimed at no particular target. Let ’em land where they may. Nothing is off-limits. It’s all gotta go.

Umm Majed al-Rayyes, 50, was rudely awoken by an explosion that literally knocked her from her bed. By learned instinct, she immediately covered her head as she lay on the floor screaming amid flying debris. Once she was able to arise she grabbed her four terrified children and began running past the shattered windows and chunks of concrete from where Israeli bombs had landed dead center on her apartment building in the late-night attack.

Tensions between Israel and Gaza are boiling even hotter than in 2014 when Israel and Palestine were officially at war. War has not yet been declared this go-’round, but is there any need considering how despite the occasional cease-fire the violence has never stopped?

al-Rayyes is not alone in feeling trapped as the age-old question of where to hide resurfaces for her and other Palestinians. There’s no way out. A zig or a zag makes no difference with bombs being haphazardly launched at them with no specific target. They’re all targets and Gaza is a pretty tiny place. To be exact, it only consumes 139 sq. miles.

“This whole territory is a tiny place. It’s a prison. Everywhere you go, you’re a target,” al-Rayyes said. All that remains of her family’s possessions are stuffed into two bags, but at least for now, she and her teenage sons and daughters are still breathing. The casualty rate thus far is staggering, and it isn’t close to slowing down.

Within Gaza’s 139 sq. miles reside 2 million people. There are no warning sirens and no safe zones. , a crowded coastal enclave of 2 million people, there are no air raid sirens or safe houses. Because all previous United Nations efforts to render aid in the past have ended with their temporary shelters falling under attack, it’s unlikely they’ll be stepping in. What’s the point?

Despite the Israelis not caring much about their aim, they did target a few places just to get them out the way. Three large apartment towers where some Hamas higher-ups were believed to live, along with mostly civilians, were leveled. The Israelis were nice enough to fire a few warning shots to give residents an opportunity to run like hell. The problem was, none of them realized what the explosions meant. To them, it was just another day in Paradise. But hey, at least the Israelis can say they were fair and square about things so there’s always that…

At a Gaza City hospital, distraught families told of pulling bloodied relatives from piles of rubble. One woman said her 4-year-old grandson and pregnant daughter-in-law were killed when an Israeli air raid hit their two-story building on Wednesday.

In a hospital morgue, Mohammad al-Telbani was crying out for mercy. “They bombed them without any warning. The house had nothing but the kids.” He was referencing an air on his apartment building that claimed the lives of another resident’s pregnant daughter-in-law and her 4-year-old grandson.

The Israeli government claims they’re only after Hamas but the cowards use civilians as human shields. They take up residence and set up command centers in civilian-occupied buildings, and to avoid retaliatory missile launches, they only send theirs up from areas that would experience tremendous civilian casualties if they were to fire back. This leaves them with very few options.

In 2014 Israel received worldwide criticism for doing exactly what they are doing now. The Geneva Convention’s Acts of War has been tossed in the rubbish. It doesn’t matter whether a person or you for that matter, are pro-Israel or if you favor Palestine. This isn’t about that.

This is about inhumanity at large. This is not how wars or battles are intended to be fought. Yes, there is always the risk of civilian casualties in both, but they are to be minimized to the maximum ability of the warring armies, and this is not how things are going down.

This is not to say that Palestine hasn’t been equally as guilty at times, but with limited resources, Israel has much greater strength and it’s on full display in the very worst of ways.