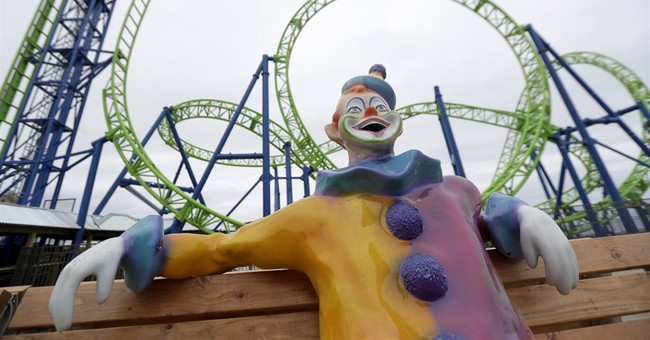 With moribund seriousness, the J6 Committee proceedings will be broadcast this week by the usual suspects: CNN, ABC, NBC, CBS, and the rest of the legacy media that cares.

Trust me, the majority of the American people don’t. This clown show is one last opportunity for Wyoming Rep. Liz Cheney, soon-to-be-ousted Illinois Rep. Adam Kinzinger, and Maryland Rep. Jamie Raskin to posture, bloviate, and make it appear as though they are fighting against the evils of Donald Trump and for American Democracy… whatever that means.

Cheney took to the Sunday shows to promote the “importance” of these proceedings. With somberness and dignity befitting such a weighty interview <full sarcasm alert>, Robert Costa of CBS News asked Cheney:

“Congresswoman, are you confident that what you have found as a committee will somehow grab the American people by the lapels and say, ‘Wake up, you have to pay attention.'”

“I am. The threat — and it’s an ongoing threat. We are not in a situation where former President Trump has expressed any sense of remorse about what happened. We are, in fact, in a situation where he continues to use even more extreme language, frankly, than the language that caused the attack. And so people must pay attention, people must watch, and they must understand how easily our democratic system can unravel if we don’t defend it.”

Last time I checked, it was a Constitutional Republic–if we can keep it. Cheney and her ilk want to confuse democratic processes with a Democracy and then use Banana Republic tactics to maintain their power, while destroying free speech and due process.

As former Trump staffer Peter Navarro wrote in The Washington Times, before he was dragged away in chains, this J6 Committee show trial is a Kangaroo Court that can barely justify its existence, which is why it’s still trying to subpoena Trump officials who could give a rat’s patootie, while sitting on Capitol Police video footage from the kerfuffle, releasing it over a year later. Despite the puffery of its members, there is no There, There. It’s a side show for the TDS-riddled, and the Clown Queen Cheney is now its carnival barker.

A former top adviser to the House committee investigating the Jan. 6 Capitol breach admitted Sunday there was no “smoking gun” that suggested President Donald Trump planned the breach.

Denver Riggleman, a former Republican House representative, had recently been a senior adviser to the panel. He told CNN’s “State of the Union” Sunday that there was no direct evidence that suggested the breach and protests outside the Capitol were premeditated.

The only threat to Cheney is that she is being exposed for the fraud she is. Her supposed duty to wake the American people up, and her feted role in American governance will soon be deemed irrelevant. With a 71 percent unfavorable rating in recent polls on the Wyoming Congressional race, it looks like Cheney will also be saying goodbye to her congressional seat. So, she is playing at statesman and arbiter of truth the way your three-year-old plays at tea party.

And nothing says carnival and contrived farce than hiring a media producer to stage the proceedings.

James Goldston — former president of ABC News, and a master documentary storyteller who ran “Good Morning America” and “Nightline” — has joined the committee as an unannounced adviser, Axios has learned.

I’m told Goldston is busily producing Thursday’s 8 p.m. ET hearing as if it were a blockbuster investigative special.

He plans to make it raw enough so that skeptical journalists will find the material fresh, and chew over the disclosures in future coverage.

And he wants it to draw the eyeballs of Americans who haven’t followed the ins and outs of the Capitol riot probe.

Good luck with that. Americans are concerned about $10.00 a gallon gas and feeding their families. Like the gang that can’t shoot straight, the Democrats and their willing allies like Cheney are throwing everything at the wall to detract from the Biden administration’s massive failings: the economy and energy being chief among them.

While this bunch cannot smell what it’s shoveling, the American people certainly do.

Goldston is shaping a massive trove:

The hearing will be a mix of live witnesses and pre-produced video.

I’m told the committee has gained access to official White House photographs from Jan. 6, 2021, that have never been seen publicly.

Only a fraction of the surveillance footage from inside the Capitol — all kinds of angles were captured — has been shown.

Americans have neither the patience, nor the bandwidth for political entertainment that masquerades as life-altering proceedings. We have a President who lies through his teleprompter constantly about the state of the nation and what he is doing. With over a year to see these elected fools in action, it’s no longer a stretch to believe this Joke-6 Committee is simply set up to do more of the same.