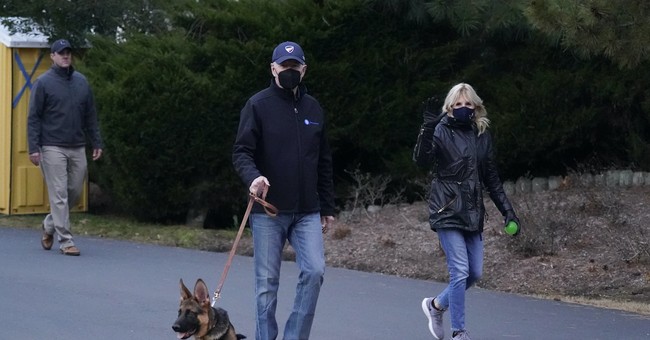 President Joe Biden saw fit to head to one of his two Delaware beach homes this weekend, adding to the 188 full or partial days away from the White House spent vacationing since he took office. It’s not as if there’s much going on, right? At the rate he’s going, he could become the most highly-vacationed president in US history.

When he’s not vacationing in Delaware, he also likes to visit Camp David and Nantucket. His sojourns break down thusly: 130 days in either Rehoboth or Wilmington, Delaware, 52 days at the presidential retreat at Camp David in Frederick, Maryland, and six days on the luxury island of Nantucket. No word on whether he windsurfs with John Kerry while on the island.

As we reported on Friday, Biden spent more than a quarter of his first year in office relaxing in Delaware (the most for an inaugural year in history) and has continued at that pace in year two. “Every time I get a chance, I go home to Delaware. You think I’m joking. I’m not,” Biden said in February.

No, Joe, we didn’t think you were joking.

According to the Washington Examiner, if the pace continues, “Biden will spend roughly 553 days away from the White House, which he has referred to as a ‘gilded cage,’ over his first term, or 1,106 days over two terms.” Luckily I don’t think we have to worry about a second term, because his prospects look unlikely at best.

Biden is outdoing them all.

Back in the day, “Dubya” used to take a lot of heat for his vigorous vacationing. During his two terms, Bush Jr. visited his ranch 77 times spanning all or part of 490 days (more than a full year). When asked about the visits to his home state, Bush told the Associated Press at the time: ‘I’m able to clear my mind, and it helps me put it all in perspective.’

Presidential historian Craig Shirley doesn’t think it’s a good look for a president to be away from the White House so often, especially during times of crisis:

“There’s a public relations angle to it. If the country is in crisis, it’s better for the president to stay in the White House,” he said. “I used to get mad at Bush when he’d be seen chopping trees when the country was going through all these problems. I thought it showed an insensitivity to the needs of the American people.

White House Spokesman Andrew Bates has previously stated that “presidents of the United States are constantly on the job, regardless of their location–whether they’re on a state visit overseas or just 100 miles from the White House for a short trip to Wilmington.”

Should we criticize a president for getting some much-needed downtime considering he holds one of the most high-stress jobs in the world? If he’s doing a good job–no. But as Shirley points out, when the country is in crisis, it’s not reassuring to the people that their president is on the beach again. It’s been over 114 days since Joe’s given a press conference.

Between skyrocketing inflation, a baby formula crisis, record gas prices, and a war in Ukraine, just to name some of the issues we’re facing, America needs a president who isn’t off building sandcastles but who is at his desk in the White House.