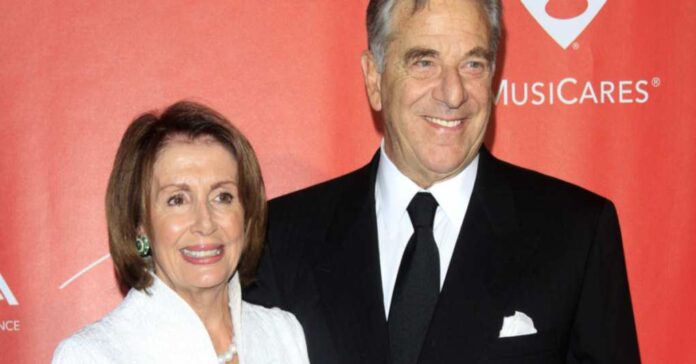 Nancy Pelosi’s husband has been talked about more recently than ever. Paul Pelosi loves to play in the stock market – and he’s helped to make the couple a lot of money during the time that Nancy has been in Congress.

One of the reasons why Congress is talking about eliminating the ability for Representatives and Senators (and their partners or spouses) to buy and sell stocks is because of the success that Paul Pelosi has had.

A lot has gotten swept under the rug because Paul happens to be the husband of the Speaker of the House. Surely, he can’t really get in trouble…can he?

A new story has surfaced to show that Paul Pelosi isn’t above the law.

He was drinking and driving. Getting drunk is one thing. Getting behind the wheel while obviously intoxicated is quite another – and there’s no telling who could have gotten hurt because of his decision.

Luckily, cops in Napa County were able to pull him over before he could hurt anyone or himself.

Paul Pelosi has been arrested on suspicion of DUI – and of course, Nancy is silent over her husband’s inability to follow the law.

At 82-years-old, this kind of behavior is unacceptable. And the fact that he even tried it may support the idea that he believes himself to be above the law.

Paul was taken into custody late on Saturday night according to the online booking report by the sheriff’s office. He was picked up north of San Francisco.

The charges he faces include driving under the influence and also driving with a BAC (blood alcohol content) of over 0.08.

The bail was set for a measly $5,000, which shows that he was definitely given some special treatment. While it is a misdemeanor, most people see a bail of $10,000. Had it been a felony, the bail could have been as high as $50,000.

According to Nancy Pelosi’s spokesperson, who spoke to the Associated Press, “The Speaker will not be commenting on this private matter which occurred while she was on the East Coast.”

It’s not surprising that she’s not willing to comment. What is she supposed to say? She’s probably trying to figure out why he was even out drinking that late and why he chose to drive while he was intoxicated. At his age, he should know better. And his behavior is likely an embarrassment for the Speaker of the House.

While her husband was getting trashed, she was delivering the commencement address at Brown University in Rhode Island.

The news of Paul Pelosi’s arrest was first reported by TMZ. This is exactly the kind of gossip that they live for. It’s not every day that someone gets a DUI when they are connected to one of the most powerful people in the U.S. government. Considering that Nancy Pelosi is third in the line of succession, we should absolutely care about what Paul Pelosi is doing while his wife is away. God forbid something were to happen to both Biden and Harris, Paul would find himself in the White House as the First Man.

Unfortunately for all of us, while the County of Napa lists all of its arrests in a public database, they don’t show off the mugshots. He was arrested at 11:44 PM on Saturday night but wasn’t actually booked until 4:13 AM the following morning. We’re sure Nancy is thrilled that the mugshot isn’t public record…