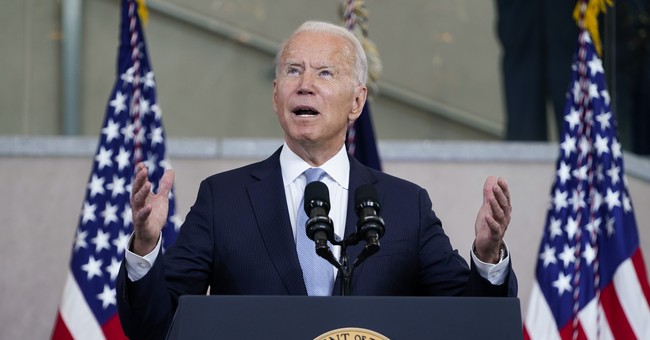 Joe Biden’s brain was not doing well on Tuesday.

His brain seemed to disintegrate in the morning during the Coast Guard changing of the guard ceremony.

Then during a later event about the baby formula shortage, Biden blanked on what the name of his Health and Human Services Secretary was.

But as we noted, the Biden team can’t seem to get their story straight on what they knew about the baby formula situation and when. Depending on who you listen to, Biden said he found out in April, former White House Press Secretary Jen Psaki and then-Deputy Press Secretary Karine Jean-Pierre said the White House found out in February (when the FDA shut down Abbott over questions about their formula). Meanwhile, Becerra says he’s known since last year.

Bottom line? They didn’t do anything to address the problem that’s been out there for months until the parents made enough a stink about it to the media this past month, even though the FDA shut down of Abbott made the situation worse so they should have known there was going to be a problem. But the problem has been ongoing since last year, although the Abbott shutdown brought it to a pitch.

Even CNN’s Jake Tapper was mystified by what they had been doing and why they didn’t inform Biden earlier as he spoke to NEC Director Brian Deese.

Tapper does a nice job of laying out the problematic timeline that took so long, hardly approaching it as fast as they could, as the Biden team has claimed.

Deese dared to say that they were going to “investigate” what happened in the timeline of events. Tapper responded, “I don’t need the FDA to investigate itself to come to the judgment that they did not act quickly enough, and on behalf of all of the frustrated moms and dads and guardians out there, I hope you don’t either.”

But if there was a moment that truly encapsulated the failure that is the Biden Administration on this issue and everything else, it was this moment. Brian Deese tries to say they have taken this very seriously. Then, like reality came and smacked them hard, the camera suddenly went right over. Tapper’s reaction was something else.

That just says it all.