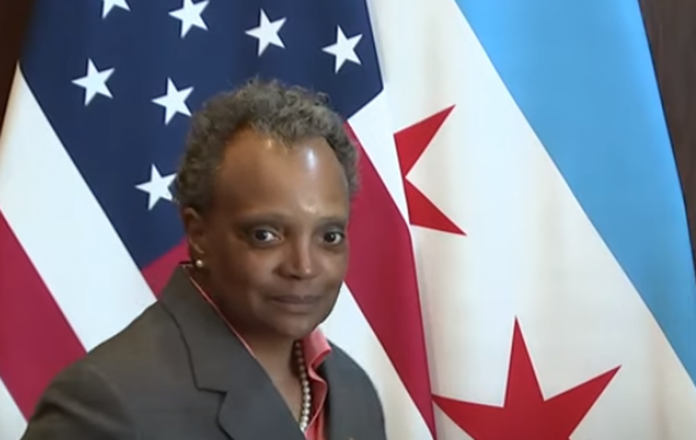 Mayor Lori Lightfoot of Chicago is always one who has opinions. She has been extremely vocal about the topic of abortion – and is all in favor of women being able to murder their unborn children if that’s what’s convenient for them.

As we wait on the outcome of Roe v. Wade in the future, Lightfoot has even made a “call to arms,” which has led to more than one violent outburst in the streets of Chicago.

The liberal mayor should have known better than to basically call for violence. The city is one of the most dangerous cities in the U.S. – and murders happen almost every weekend.

When a reporter asked Lightfoot if she was going to retract her “call to arms,” she had a few very interesting comments to make. Perhaps her defensive approach to it all is what made most people scoot to the edge of their seats to see what was going on.

It all started because Lightfoot was patting herself on the back about the construction of a casino that would help to boost tourism throughout the city.

According to the reporter, 80% of the people in the city don’t even want the casino. The reporter claimed that the reason that the tourism is suffering and that conventions aren’t coming to the city is because of violent crime.

This is probably more accurate than Lightfoot or anyone on the city council wants to admit. And since she issued what the reporter calls a “violent tweet ‘call to arms’” there’s been more violence in the streets of downtown Chicago.

Lightfoot interrupted to say “Is there a question? What is it? Let’s get to it.”

He asked her repeatedly if he would recall her violent tweet that was a call to arms.

Her first comment was, “Let him talk. The more he talks, the more stupid he sounds.”

Wow, that was uncalled for. No one was interrupting him – only her. And she couldn’t stand being called out for increasing the violence in the city, which is when she resorted to the name-calling.

She finally started to address what he said by saying that she would “deconstruct the series of lies that you just spewed,” accusing him of doing the same thing at every press conference.

She began by saying that Chicago is not down in tourism. It’s down to 90% capacity from the rate prior to the pandemic. That’s still down, but apparently, math is not the mayor’s strong suit.

Then, she decided to tear into the call to action regarding the Supreme Court decision because she feels that the clock would be turned back, preventing women from being able to have control of their bodies.

She said, “No sir, I will not stand down, I will not retreat, because women in this country are not gonna stand for some unelected body to tell us that we don’t have the right to control circumstances and the when and where in which we produce our children.”

That’s quite a speech – and it’s one loaded with misinformation. And while SCOTUS may not be elected by the people, they are confirmed by the people that we elect into office.

And so, if she doesn’t like the way in which the Supreme Court ultimately rules on Roe v. Wade, she’ll have no problem promoting violence. And as if that’s not enough, she told the reporter to stop speaking and that he’s full of crap. And when she was done, even one of her associates threatened to have the police take him out of the press conference.

Ahh, welcome to Chicago. If the guns don’t kill you, the mayor will just sick the cops on you if she doesn’t like what you have to say.