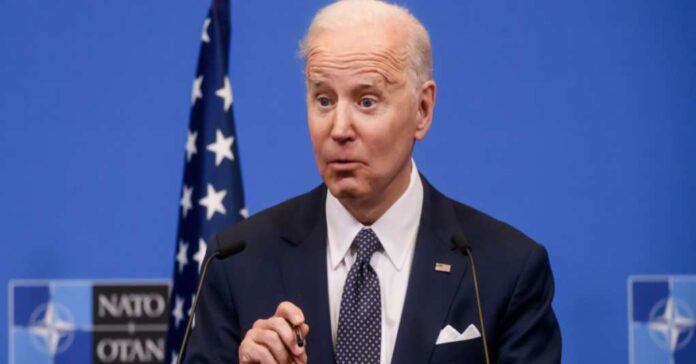 Joe Biden has long proved that he puts America last and embraces illegals first. He rolled back the regulations that Donald Trump put in place to protect the country from the invasion of illegals from the south. He has even tried to secretly bus and fly illegals into the country under cover of night. His actions are harming the country and putting lives in danger.

The old man refuses to stop embracing the enemy and start working for the country. His latest action of shipping all the baby formula to the border is another way he puts America last and illegals first. And the sad part is that he continues to try to justify his traitorous actions.

The president knows that his party is in danger of losing power with the midterm elections fast approaching. His actions have shown that he does not care about America. But in a last-ditch effort to make his name appear significant, the president has tried to solve the baby formula crisis with a messed-up idea.

Biden found an Act used during the Korean War to feed the soldiers fighting in the region. The old president reasoned that he could enact the same Act to fly baby formula from Europe to feed American infants.

The shortage of baby food was created when the president decided to ship all the supplies to the southern border to feed the infants coming over illegally. He chose to put American children last and press them into starvation, all for his love of the illegal.

The midterm elections have forced the old man to go back and attempt to solve a crisis. Instead of empowering American companies to solve the crisis he created, he tried to turn to the east for help.

The Democrats want to keep America from being the food supplier to the world. They want to turn the country into a place that needs the help of the rest of the world, seeking help from America. There will only be demand and never enough supply because Biden has stifled American production of goods.

The president tweeted, “Folks, I’m excited to tell you that the first flight from Operation Fly Formula is loaded up with more than 70,000 tons of infant formula and about to land in Indiana. Our team is working around the clock to get safe formula to everyone who needs it.”

His words are nothing but a self-righteous attempt to brag about trying to solve a problem that he created. The president needed to ask American companies to increase production and get closed facilities back up and running. But he had to turn to the world for help.

The embarrassing part of Biden’s plan is that it will only solve 15 percent of the problem, in the short run. He failed to address the problem long term. The formula will be consumed in short order, and once again, there will be a shortage of baby formula.

The president does not have a clue or a plan to solve the crisis he created. He thinks that 70,000 pounds of baby formula will win him the favor of people he has hurt.

The solution to the problem is to empower American companies to produce what is needed to feed America. Texas Governor Greg Abbott took the time and agreed to reopen a plant shut down because a few people thought that the food it produced was contaminated.

Joe Biden is a danger to himself and the country. The Democrats are clueless about the danger. But the Republicans see the problem and continue to solve issues that Biden creates actively.