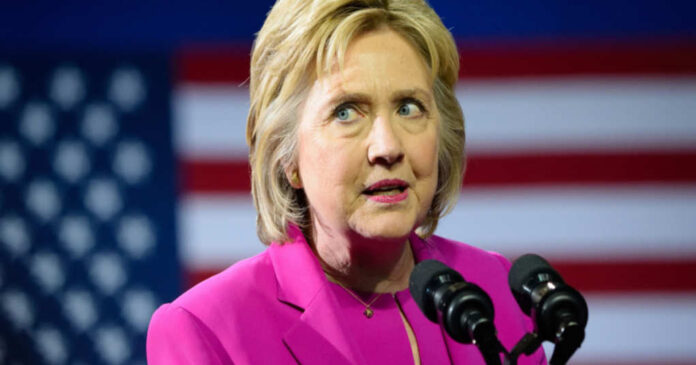 According to the political left, “disinformation” is everywhere, or basically everywhere a Republican or GOP member is. But it seems when it comes to their own party, they are less willing to admit the same, even when it comes to a has-been and failure like Hillary Clinton.

As you likely know, Clinton’s former campaign lawyer Michael Sussman is currently being tried for lying to the FBI about where and why he got the information that Trump was allegedly colluding with Russia to win the 2016 election back in 2016. Naturally, this has brought up all sorts of old wounds, news, and social media posts from the past.

And when it comes to the latter, many wonder how tweets like Hillary’s alleging such conspiracies would fair in the future if and when someone like Elon Musk owns the social media platform.

If you don’t remember much about the allegations from 6 years ago, let’s refresh a bit.

Hillary Clinton tweeted, “Computer scientists have apparently uncovered a covert server linking the Trump Organization to a Russian-based bank.” Accompanying the tweet was a statement made by Clinton’s then-campaign adviser suggesting that the link helped explain a lot about Trump, why he was successful, and why he had a “bizarre adoration of Vladimir Putin.”

Of course, we now know all this to be false and nothing more than a political scam to ruin Trump’s chances of winning the election and declaring Hillary the loser she is.

As the ongoing case against Michael Sussman has proved, not only was the allegation falsely given to the FBI, but it also had no grounds at all. Sussman claimed that he was coming to the FBI “on my own” about some information that he had found. He claimed he was NOT doing so “on behalf of a client or company” and just wanted to “help the Bureau.”

However, it has since been found via communications between him and Clinton’s campaign that all of it did, in fact, come from a client, namely Hillary Clinton.

Furthermore, as the FBI did their due diligence and investigated the matter, they found that there was nothing credible about the allegations. For example, John Baker of the FBI testified just last week that when they checked out the rumors Sussman had brought to them, “there was nothing there.”

This admission, coupled with the soon-to-be takeover of Twitter by Elon Musk, had one social media user wondering just how Musk’s Twitter would handle such false allegations on his platform.

They asked, “I have reported this tweet as misleading disinformation to the powers that be at @twitter. I would be interested to know if, when you receive control over the company, anything was done with this at any level.”

And Musk made no bones about being in complete agreement about Hillary’s “misleading” tweet.

He wrote in reply, “You are absolutely correct. That twee is a Clinton campaign hoax for which their campaign lawyer is undergoing a criminal trial.” In addition, Musk linked a BBC article about the ongoing trial to the reply, as well as directly tagged Hillary herself.

Talk about a kick in the jaw…

Of course, extremely misguided Hillary fans and leftists who refuse to see reason weren’t exactly fond of Musk calling out either Clinton or her party of liars.

Hell, some even tried to claim that the hoax is real and not made up, as the FBI has proof to contradict.

It is important to note that comments like this from Musk might smart a bit more than usual at this point. After all, as we have already established, there is a trial going on that could land Sussman and others, possibly even Hillary herself, in some rather hot water.

Plus, you might remember that it’s only been days since the SpaceX and Tesla CEO announced that he would no longer be voting Democratic. Instead, he will now be checking a GOP box during elections. According to him, the Democratic Party has turned into one of “division & hate,” and as such, he can no longer support them.

His tweet only serves to remind the left that they now have a rather ingenious and well-funded enemy. And they are apparently none too happy about it.