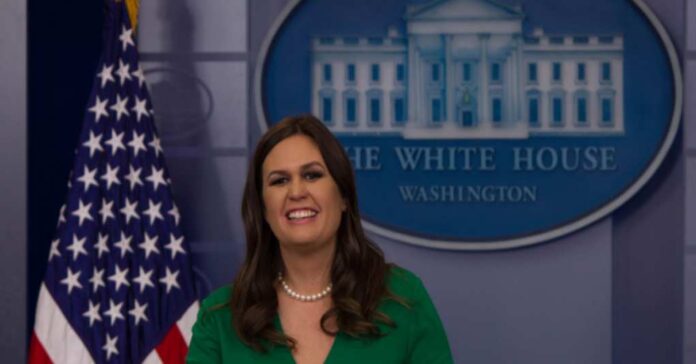 For all those Democrats who hoped that former President Donald Trump’s endorsements and connections would mean campaign losses, well, that’s not what’s happening.

Sarah Huckabee Sanders just won the state GOP nomination on Tuesday for the governor’s office. She is the former spokesperson for the Trump administration and she is the daughter of former Governor Mike Huckabee, the three-term governor in Arkansas.

Sarah Huckabee Sanders is 39-years-old and she defeated former talk radio host and podcaster Doc Washburn in what was a landslide victory. Sanders received just over 83% of the vote.

Washburn attempted a long-shot bid to beat Sanders, but couldn’t overcome the huge gap in polling and fundraising.

This means that she will go toe to toe with nuclear engineer and minister Chris Jones, who won the Democratic nomination for governor.

While giving her victory address on Tuesday night, Sanders talked about the tragic shooting of 19 children and 2 adults at a Texas elementary school. She said that the news was a “stark and humbling reminder” of how life is precious.

“Every single life has value and the most vulnerable among us should be those that we are fighting for and protecting the most. I can assure you that in my administration, that’s exactly what we will do. We will make sure that when a kid is in the womb, they’re as safe as they are in the classroom, the workplace, the nursing home, because every stage of life has value,” Sanders said in her speech.

Sanders is a married mother of three children. She totally broke all fundraising records in her state and was able to fill the TV market with ads that aimed at both President Joe Biden and Vice President Kamala Harris. Her victory was never really a question, and that will probably be true in the general election. Arkansas has not elected a Democrat as governor since 2010.

Sarah’s father, Mike Huckabee, served in the state’s highest office from 1996-to 2007. Gov. Asa Hutchinson, a Republican, is the governor today, and he is unable to run again because of term-limiting restrictions.

Sanders served under former President Trump as press secretary until June of 2019. She took over after Sean Spicer left the position. While serving in that position, Sanders took a lot of hits from the media and was made fun of by Hollywood. One time, she was forced to leave a restaurant in Virginia because of her work for Trump. She reminded her loyal to President Trump and he was her first endorsement after leaving office.

Within a week of leaving office, Trump said, “Sarah Huckabee Sanders is a warrior who will always fight for the people of Arkansas and do what is right, not what is politically correct.”

And in a recent statement, Trump wrote, “Sarah is strong on Borders, tough on Crime, and fully supports the Second Amendment and our great law enforcement officers. She loves our Military and Veterans – and her home state of Arkansas. Sarah will be a GREAT governor and she has my Complete and Total Endorsement!”

Sanders won the admiration of her state by touting conservative values that were focused on education, economic development, and rebuilding the state’s workforce and infrastructure.

She called Arkansas to make sure that their children were being educated and not indoctrinated. She wants to empower parents and not government bureaucrats so that they can be prepared for the workforce and not a “lifetime of government dependency.”

And that’s the kind of message that will likely drive her victory right into the governor’s mansion. A house she is familiar with…