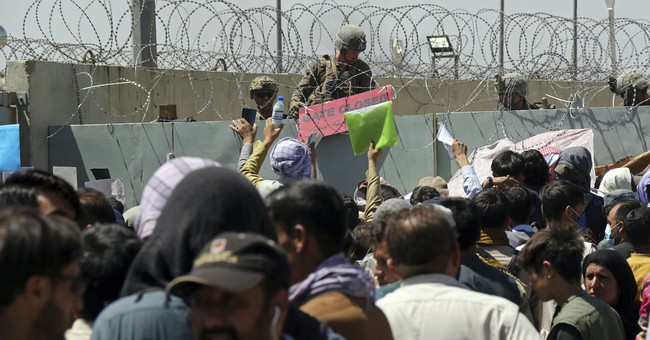 On the long list of crises intentionally created by Joe Biden over the last 16 months, it can be argued that none has been more devastating than the Biden Afghanistan Debacle(TM) — from the surprise abandonment of both the Afghan government and our NATO allies to reprehensively and deliberately leaving American citizens at the mercy of the most brutal terrorist organization on the planet. Now, there’s more.

As Just the News reported in February, the Pentagon, headed by Biden’s woefully misguided and therefore terribly inept Secretary of Defense Lloyd Austin, allowed at least 50 Afghans “posing serious security risks” into the United States. In addition, the Department of Defense Inspector General warned at the time that at least 28 Afghan refugees with “derogatory information” could not be found. What could possibly go wrong?

Just the News reported on Friday that three key Republican senators — Charles Grassley (Iowa), Rob Portman (Ohio), and James Inhofe (Okla.)– have demanded a briefing from the FBI on dozens of the Afghan refugees that were “mistakenly” let into the U.S., despite serious red flags about their backgrounds. In a letter released on Friday, the senators sought to learn how many of the refugees have been expelled, updates on those who have not, and whether Team Biden’s vetting blunders have been fixed.

To purposely digress for a minute, imagine the number of “bad guys” intent on doing “bad things” who have entered America, virtually unchecked — and continue to do — as the Biden Border Crisis(TM) rolls on, with no end in sight. Unsettling doesn’t even begin to describe that hot mess.

As suggested by the Just the News February report, the degree of ineptitude is mindboggling. The Defense Department IG reported to Congress that 28 of 31 Afghan evacuees with known “derogatory information” could no longer be located.

Not being able to locate Afghan evacuees with derogatory information quickly and accurately could pose a security risk to the United States. In addition, the U.S. Government could mistakenly grant ineligible Afghan evacuees with derogatory information [parole into the country.] Significant security concerns include individuals whose latent fingerprints have been found on improvised explosive devices and known or suspected terrorists.

Chilling. Not to mention Biden’s lies at the time, as reported by The Hill:

Planes taking off from Kabul are not flying directly to the United States. They’re landing at U.S. military bases and transit centers around the world. At these sites where they are landing, we are conducting thorough security screening for everyone who is not a U.S. citizen or a lawful permanent resident. Anyone arriving in the United States will have undergone a background check.

With all due respect, Joe — what a complete crock of crap.

Senators Grassley, Portman, and Inhofe wrote Friday, in part, as transcribed by Just the News:

In addition, we would like to know how the FBI is addressing the counterterrorism threat posed by Afghan parolees that have not been screened by DHS against the tactical database.

In the letter, sent to FBI Director Chris Wray, the senators referenced “recent information they received from the Pentagon” has “heightened their concerns that additional refugees are being released into the U.S. without full vetting,” noted Just the News. (Emphasis, mine.)

DOD also indicated that, while DHS continues to parole additional Afghans into the United States, DHS is still not using DOD’s tactical database to screen Afghans for derogatory information.

Since Afghan parolees are no longer being housed on military bases, DOD no longer has a force protection mandate to carry out the additional screening that would better protect our homeland security.

Where does one even begin? At the beginning, of course.

The Biden administration has purposely created risk after risk for America as a country, and the American people since Day One of the addled figurehead’s occupation of the Oval Office. From national security threats to economic and energy threats, the radical-left handlers of the most inept president in at least modern history have done their damnedest to destroy America as we know it.

They will not stop. Therefore, we must stop them in at the ballot box.