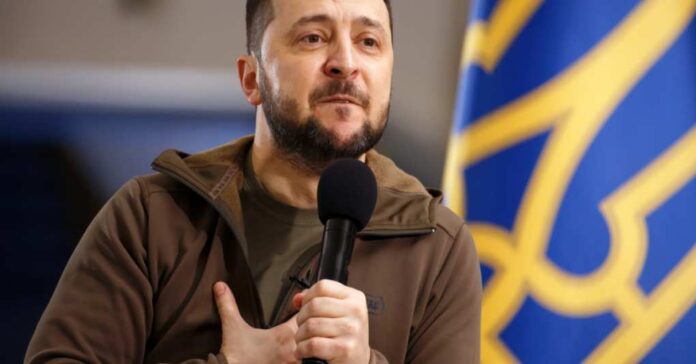 Ukrainian President Volodymyr Zelenskyy is taking a hard-line stance against the massive war machine from Russia. He declared that Putin’s forces must pull back to their prewar positions as the very first step before they can begin diplomatic negotiations. This is a stance that Russia is not likely to accept.

The Ukrainian president said that he does not see any willingness from Russia to begin talks focused on ending the three-month war against the Ukrainian people.

Zelenskyy was speaking by video link to those who gathered at this year’s World Economic Forum in Davos, Switzerland. He described a willingness to negotiate with Moscow directly, but he stressed that Putin must be willing to make it clear that he was ready to shift from war crimes to diplomacy.

“It’s possible if Russia shows at least something. When I say ‘at least something,’ I mean pulling back troops to where they were before Feb. 24. I believe it would be a correct step for Russia to make,” Zelenskyy said.

He also made it clear that it is the Ukrainian position to drive Russia out of all their captured areas. The president said that his people will fight until they reclaim all of their territories. “It’s about our independence and our sovereignty,” Zelenskyy said.

Although Putin is nowhere near agreeing to the Ukrainian demands, Russia is gradually diminishing its goals for the war. The resistance from Ukraine is making them narrow their plans.

Serhiy Haidai, the governor of the Luhansk region in Ukraine, said that eight people were wounded and six civilians were killed in the Russian shelling of Severodonetsk over the last days. He said that Russian troops were deliberately targeting shelters where civilians were hiding.

This area is Ukraine’s eastern industrial center. Putin’s forces have been concentrating their attack on this Donbas area even though they have encountered strong resistance. Russia has separatists in the area who are backed by Moscow and have joined them in the fight against Ukraine.

A mother of two who lived in a terraced house in this area said that there is no place left to live…everything is “smashed.” Windows had been blown out from earlier strikes and plastic was put up in its place. Ironically, that may have saved their lives because there was no more glass to fly from the recent shelling.

Zelenskyy said on Tuesday in his nightly address to the nation, “Practically the full might of the Russian army, whatever they have left, is being thrown at the offensive there. Liman, Popasna, Severodonetsk, Slovyansk — the occupiers want to destroy everything there.”

One of the signs that Russia is hitting its limit is that it raised the age limit for those signing their first voluntary military contract to 40. Andrei Karapolov, the parliament’s defense committee chair, indicated that the new limit would make it easier to hire people with “in-demand specialties.” They hope to use the older soldiers in operating precision weapons or engineering or medical roles.

Putin has also established a new rule that will fast-track people into Russian citizenship. This could affect people in the two southern regions of Ukraine that are being held by Russian forces.

One of the areas still to be negotiated focuses on getting wheat out of Ukraine so that it can be exported. But a solution to this problem is not going to happen any time soon. According to British military experts, Ukraine’s overland export routes are “highly unlikely” to offset the problems that Russia’s blockade of the Black Sea port of Odesa causes. This will increase global grain prices significantly.

The Ministry of Defense in Britain said this week that there has not been “significant” merchant shipping in or out of Odesa since the war in Ukraine started.

Zelenskyy is holding the line with Putin, even in the midst of all these pressures.