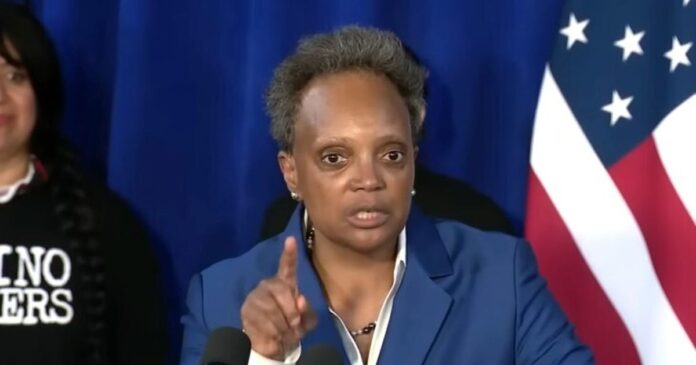 Lori Lightfoot is still facing heat over the inflammatory “call to arms” tweet she posted earlier this month after news broke of the Supreme Court leak on the draft majority opinion in which Justice Samuel Alito declared “We hold that Roe and Casey must be overruled.”

For those who missed it, the Democrat mayor of Chicago proclaimed in a May 9th Twitter mini-thread that the Supreme Court being possibly ready to overturn the 1973 Roe v. Wade abortion ruling meant they were also gearing up to supposedly take away LGBTQ rights. In it she declared that “this moment has to be a call to arms”:

Considering how former President Donald Trump was permanently banned from the social media platform in January 2021 for tweeting something that – unlike Lightfoot’s – wasn’t remotely incendiary, Lightfoot got called out big time for what sounded a lot like a siren call for leftists to commit violence if things didn’t go their way at the Supreme Court.

During a Wednesday press conference in Chicago, the Mayor was once again confronted over the tweet and some other things she’s said in recent weeks about her city in a heated back and forth exchange that ended up devolving into a shouting match with Lightfoot calling the reporter “stupid” and then later threatening to have him kicked out if he didn’t play by her rules during the presser.

“Will you rescind your ‘call to arms’ tweet in the light … in the light of the mass shooting in downtown Chicago, as stupid as you think that may be?” the reporter asked after she said he sounded “stupid.”

“So let me just deconstruct the series of lies that you just spewed, as you do every time you come to one of our press conferences,” Lightfoot began before briefly trying to counter a point the reporter made on why people didn’t want to visit Chicago (high crime).

She then launched into a lame defense of her “call to arms” tweet, stating she wouldn’t back down as though the reporter was demanding she stop talking about the draft majority SCOTUS opinion (he wasn’t).

“Somehow, the call to arms, the call to action that I issued, in the context of the Supreme Court decision to overturn Roe v. Wade and basically turn back the clock 50 years time where women are not gonna be able to be in control of their bodies,” she told him, calling his characterization “a lie.”

She went on to say, “No sir, I will not stand down, I will not retreat, because women in this country are not gonna stand for some unelected body to tell us that we don’t have the right to control the circumstances and the when and where in which we produce our children!”

Moments later she threatened to have him thrown out, and in the video you can see a handler trying to nudge the reporter to move on but he wouldn’t. Instead, he sat there and continued to take footage of the moment as Lightfoot told him he was “full of crap” before threatening to get the police to escort him out.

I’m not sure what I found more disturbing about the clip. Lightfoot’s behavior, which she has become infamous for, or all the clapping, some of which sounded like it was coming from reporters.

In any event, this is classic Lori Lightfoot, unfortunately, and it is one of the reasons why so many people call her “America’s worst mayor.” Not only did she not directly answer the question, but she launched into some left-wing rallying cry for women’s rights when the reporter didn’t take issue with her opinion in and of itself but her way of expressing it. Big difference.

I mean, a “call to arms” is literally a call to take up weapons against your opposition, and considering how often supposedly “violent right-wing rhetoric” gets blamed for the violence that happens in this country, why can’t she just admit she made a mistake and delete the tweet?

She can’t admit it because leftists are not only never wrong in their eyes, but they’re also rarely held to account in the same way conservatives are, and this is a classic example of that.

Flashback: Reporter Rips Into Lori Lightfoot in Heated Exchange Over ‘All the Harm’ She’s Caused Chicago