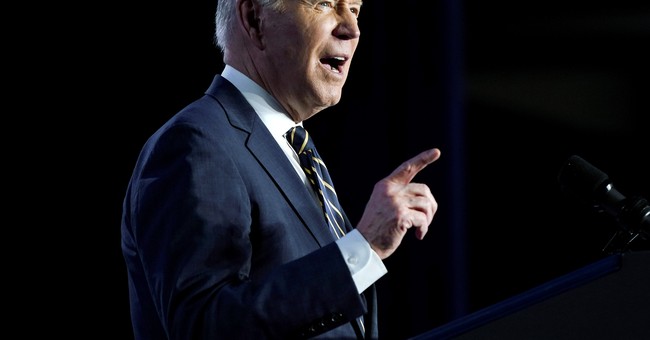 I’m convinced that someone told Joe Biden once upon a time that the way to give good speeches is to try to relate to your audience. That’s certainly true. But it doesn’t mean just to make things up that never happened to make you sound more like your audience. So we’ve heard all kinds of false stories from Biden over the years, from his false stories about him being a truck driver while talking to truckers to imaginary meetings with an Amtrak conductor, while speaking at an Amtrak ceremony.

Joe Biden was at the U.S. Naval Academy on Friday to address the graduating class of 2022. So what did he do? If you guessed that he claimed that he received an appointment to the Naval Academy — congratulations, you win.

Before I begin my speech, a thought crossed my mind as I was told the Class of ’72 is here. I was appointed to the Academy in 1965 by a senator who I was running against in 1972. (Laughter.) Never planned it that way. I wasn’t old enough to be sworn in. I was only 29 years old when I was running. He was a fine man, and his name was J. Caleb Boggs.

I didn’t come to the Academy because I wanted to be a football star. And you had a guy named Staubach and Bellino here. So I went to Delaware.

This story is nonsense. He graduated from the University of Delaware in 1965. No, he wouldn’t have been getting an appointment to the Academy at that point. So, he didn’t decide against the Academy because he wanted to go to Delaware — he was already going to Delaware.

“But all kidding aside,” Biden continued on Friday, “the best line of the debate was after it’s all over, the announcer, the questioner — who was a good guy, but supported my opponent, who was a good man as well, I might add — and he said, ‘Sen. Boggs, is there anything else you want to say?’ And he said, ‘Yes, just one thing.’ And he took the microphone. He said, ‘You know, Joe, if you accepted my commission to the — my appointment to the academy,’ he said, ‘you’d still have one year and three months’ active duty and I’d have no problems right now.'”

It’s unclear if Biden has told the story before, but it surprised political journalists who have covered his many campaigns and his presidency. Biden’s 2008 autobiography “Promises to Keep” does not mention the Naval Academy.

Translation? It didn’t happen and he’s likely inventing out of whole cloth a conversation with Boggs-that he’s now representing as true-to members of our military.

In fact, Joe Biden got five student deferments in the ’60s, while he was in college and in law school. He reportedly was deemed “unfit” for service in 1968 because of asthma, despite playing football and being a lifeguard.

Biden also lied about how many times he had been in Iraq and Afghanistan, and implied his son died in action.

I mean it — you really are. I’ve been in and out of Iraq and Afghanistan over 40 — I think 38 times. My son spent a year in Iraq, won the Bronze Star, Conspicuous Service Medal. I lost him.

The Washington Post has called out this lie in the past and said Biden’s own campaign clarified back in 2019 that the correct number of visits is 21.

Unfortunately, that sounds more like a warning, not something that inspires confidence on graduation day.

Biden also claimed that he got North Korea to agree to sanctions against Russia.

For the first time — if I can hesitate for a second here — did anybody think, when I called for sanctions against Russia, that in addition to NATO, that Australia, Japan, North [South] Korea, some of the ASEAN countries, would stand up and support those sanctions?

He meant South Korea. Um, Joe, they are not the same.

Biden also was trying to say “Finlandize” (meaning: taking a more neutral position) but instead, he said “Fingalize.” “The actions taken by Putin were an attempt to — to use my phrase — to Fingalize all of Europe, make it all neutral,” Biden said. “Instead, he NATO-ized all of Europe.”

Finally, he played some more mask theater. While he wore his mask to walk up to the stage, he took it off when he got to his seat-among all the people wearing their masks.

What do you say when you have a man like this in such a position of power and he has no concept of reality?