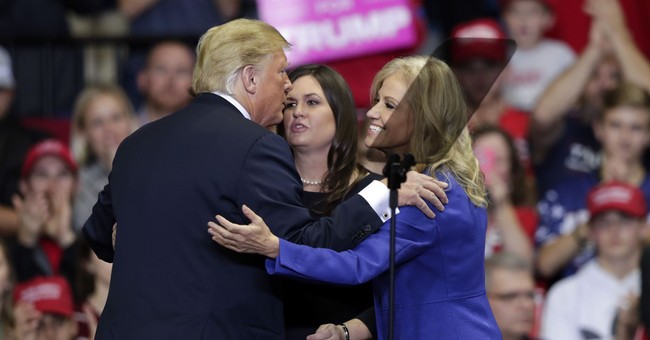 Former President Donald Trump is slamming former Press Secretary Kellyanne Conway over a claim in her new book that she told him he had lost the 2020 presidential election.

“Kellyanne Conway never told me that she thought we lost the election,” Trump posted Thursday on his social media platform Truth Social. “If she had, I wouldn’t have dealt with her any longer–she would have been wrong–could go back to her crazy husband.”

“Writing books can make people say some very strange things,” he added. “I wonder why?”

Trump was fuming because of one line in Conway’s “Here’s the Deal,” her new memoir, in which she heavily criticizes former adviser and Trump son-in-law Jared Kushner, Dr. Anthony Fauci, and even her own husband. She notably did not criticize Trump.

The line that angered the former president, according to the New York Daily News:

I may have been the first person Donald Trump trusted in his inner circle who told him that he had come up short this time.

Trump has long insisted the election was rigged, and is basically saying in his post he would have fired her if she had told him he had lost. This even though Conway was actually quite complimentary to Trump in her 506-page tome, a rarity in books by former administration officials:

“Donald Trump had elevated and empowered me to the top of his campaign, helping me crack glass ceilings that had never even been dinged before,” she writes, adding that “angry feminists” should “have at least once in their lives a ‘girl boss’ as generous, respectful, engaging, and empowering as Donald Trump was to me and my other female colleagues.”

Kellyanne was one of the most loyal officials in the Trump administration, firmly defending him as he faced two impeachment trials, a hostile press, and crusading Democrats. She has reportedly remained close to him since she left the administration at the end of summer 2020. We’ll see if this broadside changes that.

During her tenure, he almost never criticized her, although he routinely attacked her creepy husband, vocal Never-Trumper and former Lincoln Project member George Conway. She describes in the memoir how George’s tweetstorms almost ruined their marriage (and still may). Trump stood behind her the whole time, though, in what must have been an awkward situation for all involved.

All indications are that Trump is preparing for a 2024 campaign to get back to the White House; in fact, Kellyanne said as much Thursday, in another Donald-friendly interview with Fox Business:

So there she is, giving out praise on the same day that he’s essentially calling her a liar.

Trump did many great things for the country during his tenure, and I would much rather be living in Donald’s America than the current shipwreck that is Bidenworld. Yet, I don’t see how this kind of attack on one of his most steadfast allies helps Trump’s cause. While we all have our questions on the fairness of 2020 elections, Trump is going to have to focus on the future if he wants to lead again. That’s partly because the present is such a cluster, and partly because even if he’s right, it’s too late to change the 2020 result. (I’m not saying we shouldn’t investigate the 2020 election; we need to so we can make sure there are no anomalies next time. But let other people fight that battle, like Dinesh D’Souza does in his excellent documentary 2000 Mules.)

I love Trump’s pugnacious style and singular ability to fight the crazy Dems and the liberal media. No other GOP politician comes close, with the possible exception of Ron DeSantis. We’re in for a fight for this country, and we need to win it. I wish Trump would save his fire for the opposition, and not the soldiers fighting alongside him. He could have simply said of Conway’s comment, “That’s not how I recall it,” and move on. He didn’t have to go there.