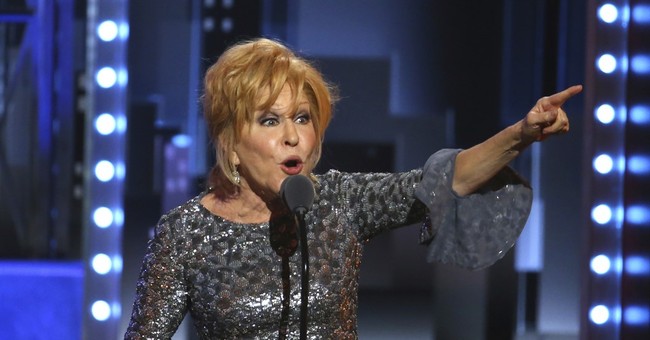 Actress Bette Midler on Wednesday fired up her Twitter machine and encouraged her fellow gun-grabbers to not only show up to protest at the National Rifle Association’s annual convention in Houston, this weekend — but also to “come armed.” No, really.

In response to a tweet from some random person that “PEOPLE SHOULD SHOW UP AND PROTEST AT THIS CONFERENCE” — yes, the original tweet was in all caps — Midler tweeted:

No doubt oblivious to the ironic hypocrisy.

So, here’s the question. Given the crazy, whacked-out mind of Bette Midler, was she serious? Or was this just a really bad attempt at a really bad joke? If the latter, it would be almost worse than the former — and just as stupid. Not to mention, Midler was no doubt one of the first left-wingers to declare that Trump incited the January 6 Capitol Building “insurrection.”

Here are just two of the many polar-opposite responses on Twitter.

The first is warped as hell.

Then, one of many who said Midler should be held directly responsible if an armed protester opens fire outside the convention:

In addition to this nonsense, as reported by Bloomberg News, a hospice chaplain who has served in two pediatric trauma hospitals is organizing an interfaith demonstration on Friday in downtown Houston to protest the NRA presence. According to Bloomberg, “dozens of followers from several different faiths — Christian, Jewish, Muslim, and Buddhist — have been invited to pray outside the convention center before leading a silent march through the building during the convention.”

“Christianity has helped lead us to this place and that is a tragedy,” said one of the organizers. “We should be leading away from the violence and individualism associated with guns.”

As well-meaning as one assumes the hospice chaplain and other organizers are, they never seem to grasp the simple concept that the only thing that stops a bad guy — a horrific madman as it were — with a gun is a good guy with a gun. Moreover, that “good guy with a gun” is often a law-abiding armed citizen, without whose presence and courage, more unarmed innocents would likely lose their lives.

As to Better Midler, she’s is irrelevant. Except for highlighting the idiocy of the gun-grabber crowd.

Stop Letting Our Schools Be Soft Targets for Mass Shooters