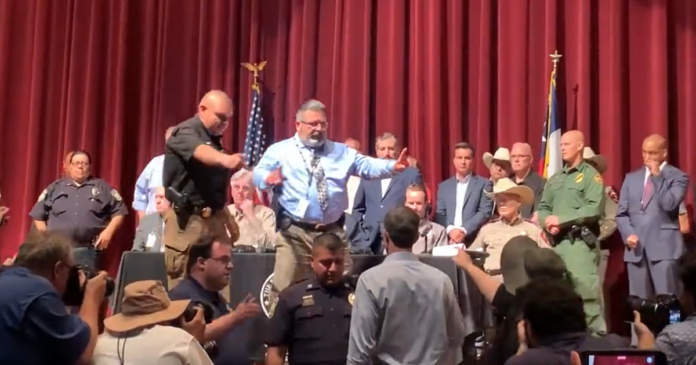 We reported earlier how Beto O’Rourke tried to hijack the press conference that Gov. Greg Abbott and other Texas officials were holding in regard to the Uvalde mass shooting.

Most found his action unconscionable when people were dealing with such tragedy, although some on the left appeared to praise it. Rep. Dean Phillips (D-MN) compared O’Rourke to the “Tank Man” from the Tiananmen Square massacre in a horrible take, claiming Beto was “speaking truth to power.” Phillips subsequently deleted the tweet.

But while Beto was trying to interrupt the people dealing with tragedy, a man in the audience interrupted Beto in turn. Cody Ytuarte, a carpenter who was there for family affected by the shooting, was near O’Rourke when he began his outburst at the presser. According to the Huffington Post, Ytuarte responded to O’Rourke, “This is propaganda, bro. Get out of here. You’re trash, man.”

Ytuarte left the Democrats because of their policies, including “division about race policies” that drove him away.

He also has concerns about more gun regulations.

He said he liked Trump’s mean tweets and it was “obvious,” especially with what we were facing now, that Trump’s policies were better. He also indicated he rejected the mischaracterization of the liberal media of President Donald Trump.

Sounds like a lot of truth there and a lot of common sense. Uvalde went to Trump by 14 points in 2020. We’ve seen this move of Hispanic voters away from the Democrats driven by sense like this and the realization that the policies of Republicans are better, that those of Democrats are more extreme and not helpful for your life. Beto’s interruption of the presser served as further evidence of the extreme position of the Democrats and why people are leaving them in droves.