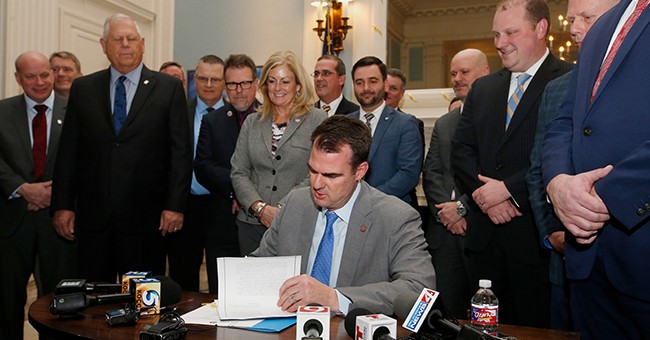 The law, similar to the law recently passed by Texas, has a civil enforcement mechanism rather than criminal prosecution. It provides for civil lawsuits to be brought by private citizens (not the state) against any person who performs an abortion in violation of the act or “aids or abets the performance or inducement of an abortion, including paying for or reimbursing the costs of an abortion through insurance or otherwise.”

The law does not allow for suits to be brought “against the woman upon whom an abortion was performed or induced or attempted to be performed or induced in violation of this act, or against a pregnant woman who intends or seeks to abort her
unborn child in violation of this act,” or “by a person who impregnated a woman seeking an abortion through an act of rape, sexual assault, incest, or any other act prohibited by state law. ” (emphasis mine) In other words, the suit may not be brought against the woman who sought/obtained an abortion nor by a man who illegally impregnated the woman.

to save the life of a pregnant woman or if the pregnancy is the result of rape or incest that has been reported to law enforcement.

The bill specifically authorizes doctors to remove a “dead unborn child caused by spontaneous abortion,” or miscarriage, or to remove an ectopic pregnancy, a potentially life-threatening emergency that occurs when a fertilized egg implants outside the uterus, often in a fallopian tube and early in pregnancy.

The law also does not apply to the use of morning-after pills such as Plan B or any type of contraception.

In connection with the signing, Governor Stitt issued the following statement:

“I promised Oklahomans that as governor I would sign every piece of pro-life legislation that came across my desk and I am proud to keep that promise today….From the moment life begins at conception is when we have a responsibility as human beings to do everything we can to protect that baby’s life and the life of the mother. That is what I believe and that is what the majority of Oklahomans believe.”