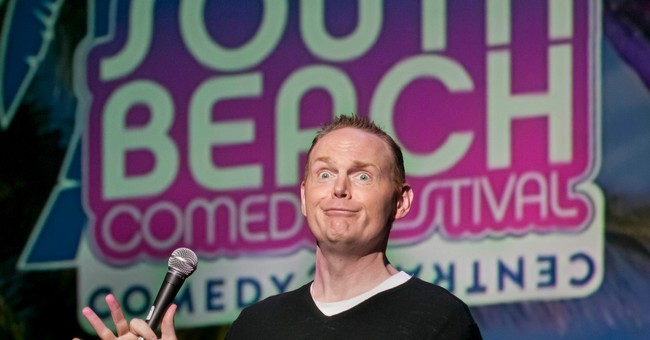 Self-proclaimed “lefty” Bill Burr has released a statement that’s sure to anger many Americans on his side of the aisle.

He did so in passing, but that won’t likely let him off the hook.

During his Thursday Afternoon Monday Morning Podcast, the comedian waxed on government control in general and abortion in particular.

Amid his monologue — intentionally or not — the man traversed and trounced transgenderism.

In his own words (Trigger Warning):

(Reading an internet headline) “Democratic Witness Tells House Committee Men Can Get Pregnant and Have Abortions. Um, alright. I don’t really need to click on that.”

“What do you mean, men can get pregnant? What the [heck] are they talking about? This is like, this is just, as a lefty, I don’t understand.”

To his way of thinking it’s an extreme idea:

“Well, you know what? It is the extreme Left. You know what I mean? … Like, I would never call in sports talk radio. I guess I’m glad people do. I’m glad there’s people that go before the…Senate or whatever, a House committee…and tell them a man can get pregnant.”

Bill considered the hypothesis, then came to his own controversial conclusion:

“A man cannot get pregnant.”

He even went so far as to bolster his claim:

Such a statement would once have welcomed agreement from everyone on Earth. But times, as they say, have changed. Bill is challenging a notion nearly every person of prominence now professes to believe.

“A man can get pregnant” is institutionally accurate:

Calvin Klein Salutes Mothers, Including a Pregnant Man Who Isn’t a Woman

New Smartphone Emojis May Include a ‘Pregnant Man’

Hospitals Are Starting to Ask Men if They’re Pregnant

University Schools Midwifery Students on the Handling of the Birthing Penis

Even so, Bill isn’t the only one buzzing cancellation like a moth flapping around a floodlight:

Burr did admit things could change:

“In the future, [a pregnant man is] gonna happen. Because they can already grow…an ear in a petri dish. The [stuff] that they can do is [flipping] unbelievable. So basically, when modern medicine becomes, you know, Gas Monkey Garage, and you can basically do a body-off restoration…where you’re combining different eras — except you’d combine different genders — there’s going to be…women pressuring their men. It used to be to get a vasectomy. Now it’s going to be, ‘Why don’t you get a womb? And why don’t you carry this [darn] thing around?”

As for the stork sticking his pollinating beak into a man’s unmentionables, we’re informed we should trust the experts. We’re also told that those in government know best.

Given that, Bill’s entire framing of the issue is outmoded. After all, men and women are only a third of the procreating pie:

University Forces All Graduates Through ‘Antiracism’ and Microaggression Training