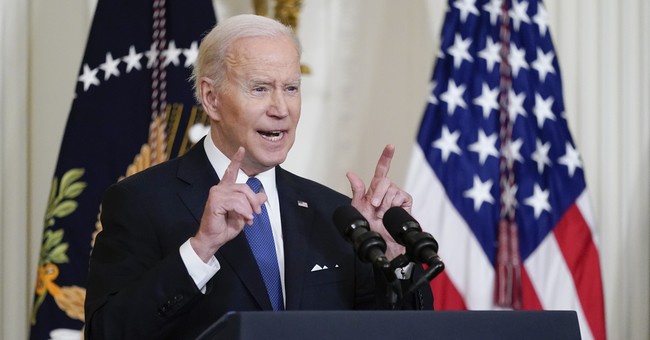 Joe Biden delivered remarks on the shooting on Tuesday at Robb Elementary School in Uvalde, Texas. At least 21 have died at the hands of the shooter, including 18 children and one teacher. The shooter has been identified as 18-year-old Salvador Ramos. A border patrol agent was shot responding to the incident. He was just trying to help out; there was no immigration nexus to the matter. Ramos allegedly shot his grandmother earlier in the day, drove to the school, and began shooting up the school.

Biden ordered the flags on the White House to be flown at half-mast as a “mark of respect for the victims of senseless acts of violence.”

“I had hoped….I wouldn’t have to do this again,” Biden said, noting that the parents will never be the same.

To lose a child is like losing a piece of your soul, he said, it’s never quite the same. “The Lord is near to the broken-hearted and saves the crushed in spirit.” He asked the nation to pray for the parents and families. He managed not to talk about his son, although it sounded like it was almost going to go there. But had he stopped there it would have been good — a comforting leader, showing empathy for the pain of the families.

But with just those brief remarks, he then moved on to his attack on guns and his push for gun control.

What law would have stopped this, when he doesn’t even know what the facts are yet? The gun lobby has nothing to do with this shooting. And it’s about the evil and/or mental health of the shooter.

“I am sick and tired of it. We have to act,” he demanded. Biden said when he passed the assault weapons law, such crimes went down. That was a lie; there is no such evidence.

We have no evidence of what type of weapons were used, yet but Biden claimed that Ramos had gone into a store and bought two assault weapons. It’s unconscionable that he should be saying such things. But Biden doesn’t seem to care about sticking to the facts that we know at this point. He is the same man who lied — during remarks to the Buffalo mass shooting victims — about a Dallas mass shooting being about white supremacy when it was allegedly committed by a black man.

Then in Tuesday’s speech, he screamed about assault weapons, claiming deer aren’t running through the woods with kevlar on, in an insane comment.

Biden lied saying it doesn’t happen in other countries — he must have missed the cartel shooting 11 people to death in Mexico, also on Tuesday.

He then repeated the “broken-hearted and crushed in spirit” remark again.

What Biden should have done, even just for a day, is think about the parents and the families of the victims. That’s where the focus should be, instead of on trying to yet again push for his political agenda. Just take a moment out to truly care about the people who have just gone from us instead of politics.