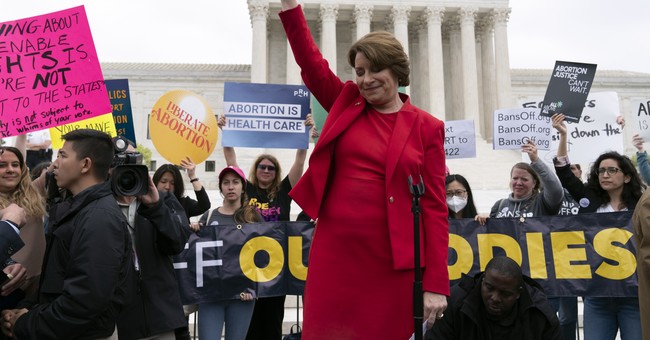 The Dinesh D’Souza documentary, 2000 Mules offered insight into how the 2020 Election could have been hijacked. It also introduced many to location and data tracking, and how this could be used for more conservative causes: like being able to track a woman who may be seeking an abortion.

VICE is aghast that a capitalist company Safegraph would dare sell its data for profit and marketing purposes, instead of ideology. The leftist new media arm quickly sounded the alarm:

How data collecting intersects with abortion rights, or the lack thereof, is likely to gather more attention in the wake of the draft. The country may also see an increase in vigilante activity or forms of surveillance and harassment against those seeking or providing abortions. With this aggregated location data available to anyone on the open market, customers could include anti-abortion vigilantes as well. Anti-abortion groups are already fairly adept at using novel technology for their goals. In 2016, an advertising CEO who worked with anti-abortion and Christian groups sent targeted advertisements to women sitting in Planned Parenthood clinics in an attempt to change their decision around getting an abortion. The sale of the location data raises questions around why companies are selling data based on abortion clinics specifically, and whether they should introduce more safeguards around the purchase of that information, if be selling it at all.

“It’s bonkers dangerous to have abortion clinics and then let someone buy the census tracks where people are coming from to visit that abortion clinic,” Zach Edwards, a cybersecurity researcher who closely tracks the data selling marketplace, told Motherboard in an online chat after reviewing the data. “This is how you dox someone traveling across state lines for abortions–how you dox clinics providing this service.”

Last time I checked, it was the Left and the death purveyors doing the doxing. As for the targeted advertisements sent to women’s phones? We all get spammed every day with unnecessary garbage ads and we manage to ignore it. This advertisement is just as non-invasive, but is targeted to save babies. But the part of Team Planned Parenthood who masquerade as our elected representatives are desperate to see this practice stamped out, especially in light of the SCOTUS decision that could eradicate Roe v. Wade.

Sixteen Democratic senators have written to Federal Trade Commissioner Lina Khan to ask how the personal location data of people seeking abortions will be protected in states where abortion may soon be criminalized.

The senators, led by Amy Klobuchar and Tammy Baldwin, said they had “serious concerns regarding recent reports identifying data brokers buying and selling location data that include personal data related to family planning and abortion services.”

An FTC spokesperson said: “I can confirm we have received the letter but we do not have any additional comment.”

Both Senators Tammy Baldwin (D-Wisc.) and Amy Klobuchar (D-Minn.) were strong advocates of tracking humans when it came to COVID. Baldwin used the inequity and disparity excuse to push for more COVID contact tracing in minority communities.

Baldwin said the country needs to do a better job to know how many people in communities of color have access to testing, are testing positive, or are dying.

According to polls, “communities of color” are still showing vaccination rates far below the average. Did she ever consider that part of the reason for that is they do not want to be tracked or traced?

But Baldwin gladly plowed ahead with her goal of ensuring tracking measures were inserted into the garbage COVID legislation that Congress is still spitting out.

Baldwin said she was able to get some of the health tracking measures into legislation passed this week. She said she’ll keep pushing for the economic data as well.