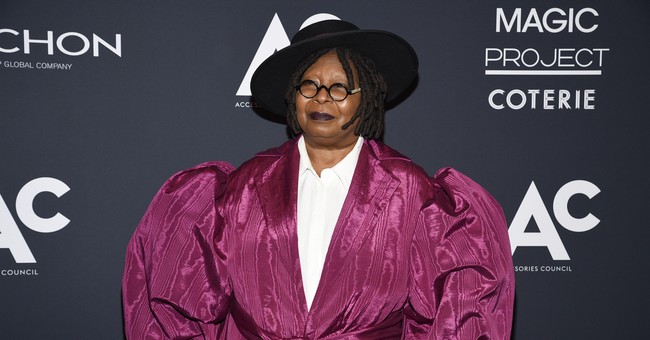 The Harpies of The View are at it again.

On Monday’s show, the hosts weighed in on Archbishop Salvatore J. Cordileone’s Friday letter to House Speaker Nancy Pelosi, telling her that she needs to repent of her support and promotion of baby killing–abortion for those in Rio Linda–if she expects to receive the Eucharist aka “Holy Communion” any time soon.

Cordileone, who serves Pelosi’s home district of San Francisco, said he informed the congresswoman of his decision Thursday after repeated attempts to speak with her about the “grave evil” that she is supporting.

Pelosi professes to be a devout Catholic but supports the killing of unborn babies in abortions up to birth and wants to force taxpayers to pay for their deaths.

In a letter published Friday on the archdiocese website, Cordileone explained his decision to deny communion to the Democrat leader:

“After numerous attempts to speak with her to help her understand the grave evil she is perpetrating, the scandal she is causing, and the danger to her own soul she is risking, I have determined that the point has come in which I must make a public declaration that she is not to be admitted to Holy Communion unless and until she publicly repudiate her support for abortion ‘rights’ and confess and receive absolution for her cooperation in this evil in the sacrament of Penance.”

The archbishop stressed that his decision is “pastoral, not political” and he did not find any pleasure in it. Cordileone said he also has been praying for Pelosi and urging others to join him in the hopes that she will repent and recognize the value of all human life.

Miracles do happen, and let’s pray the Speaker has a turnaround of that magnitude.

But the caterwauling from the Harpies about separation of church and state is particularly rich. It always amazes me how Leftists spout about their disdain and desired destruction of religion, until it is espoused by their leaders or suits their purposes. Archbishop Cordileone stated in his letter that his decision is from a pastoral lens, and not a political one. But that didn’t stop Whoopi Goldberg from waxing ineloquent about how church and state is being blurred and how it is not the Archbishop’s job to take this stand.

It sounds as dumb as it is:

Pelosi and Biden blur the lines every time they tout their deeply Catholic faith as a reason why a certain political policy should be implemented. They make an art form of this, but they don’t just stop there. Both have strongly alluded that if you truly are a person of faith, then you too would support, vote for, or promote such and such policy.

It is pure manipulation, wholly insincere, and always nauseating. Archbishop Cordileone finally called Pelosi on it.

In Goldberg’s show introduction, she cribs off a homily message by Pope Francis given on June 6, 2021 to commemorate the feast of the Body and Blood of Christ.

Of course, she only read the portion that matters to her, bolded below.

“When we receive the Eucharist, Jesus does the same with us: he knows us; he knows we are sinners; he knows we make many mistakes, but he does not give up on joining his life to ours,” the pope said. “He knows that we need it, because the Eucharist is not the reward of saints, but the bread of sinners. This is why he exhorts us: ‘Do not be afraid! Take and eat.'”

The discussion gets even stupider, as Queen Blackface Joy Behar calls it hypocritical that Tex. Governor Greg Abbott, a practicing Catholic who as a part of his job executes death penalty inmates, can still receive communion, but Nancy Pelosi and Joe Biden cannot.

If you care, the entirety of the bloviation is found here. Warning: You may lose IQ points.

Goldberg reading a sentence from a Pope Francis homily is akin to Pelosi, Biden, and others pulling scripture out of their hind parts that suits their policy point or justifies their actions.

For instance, before anyone, sinner or saint, can partake in Christ’s body, that person must repent beforehand in order to receive all that Christ’s death and resurrection holds. For Catholics, they are literally receiving not just a symbol, but the flesh and blood of Jesus:

The Catholic Church sets out specific guidelines regarding how we should prepare ourselves to receive the Lord’s body and blood in Communion. First, you must be in a state of grace. “Whoever, therefore, eats the bread or drinks the cup of the Lord in an unworthy manner will be guilty of profaning the body and blood of the Lord. Let a man examine himself, and so eat of the bread and drink of the cup” (1 Cor. 11:27-28). This is an absolute requirement that can never be dispensed. To receive the Eucharist without sanctifying grace in your soul profanes the Eucharist in the most grievous manner.

A mortal sin is any sin whose matter is grave and which has been committed willfully and with knowledge of its seriousness. Grave matter includes, but is not limited to, murder, receiving or participating in an abortion, homosexual acts, having sexual intercourse outside of marriage or in an invalid marriage, and deliberately engaging in impure thoughts (Matt. 5:28-29). Scripture contains lists of mortal sins (for example, 1 Cor. 6:9-10 and Gal. 5:19-21). For further information on what constitutes a mortal sin, see the Catechism of the Catholic Church.

So then, whoever eats the bread or drinks the cup of the Lord in an unworthy manner will be guilty of sinning against the body and blood of the Lord. Everyone ought to examine themselves before they eat of the bread and drink from the cup.

So as an Archbishop, the “Pastor’s pastor,” of the San Francisco Catholic faithful, Cordileone is reminding Pelosi that she is in mortal sin and needs to repent before she can receive Holy Communion again. The state of her soul and the soul of the flock is at stake. The Archbishop analyzing her spiritual state in line with the Catholic Church’s teachings and making the decision to not allow her to partake in The Eucharist is literally his job.

Are there no researchers employed at The View? This information took me less than a five minute internet search. It also helps that I went to Catholic School. However, as a non-Catholic, I was not allowed to even partake in The Eucharist during mass. I could attend as many masses as I wanted, and it was a required part of the curriculum that I did. But I did not receive the bread or the cup. I could do that at my church.

Those were the rules, and I had no problem with them–your game, your rules. So, as a Catholic, why would Pelosi have a problem with this, being as devout as she claims? On the other hand, as a person who has professed to adhere to no specific religious faith, Goldberg stupidly weighed in on a religion she knows little about, and in her weighing in, she didn’t even bother to qualify her statements or do her research on whether the Archbishop was actually doing his job.

The tragic part of this equation is that with a viewership of 2.28 million viewers (as reported in November of 2021), that’s a lot of people swallowing and disseminating disinformation and flat-out lies.

What a shame that Scary Poppins Nina Jankowicz resigned from the Disinformation Governance Board, as this would be a prime example of the disinformation she should have been digging into.