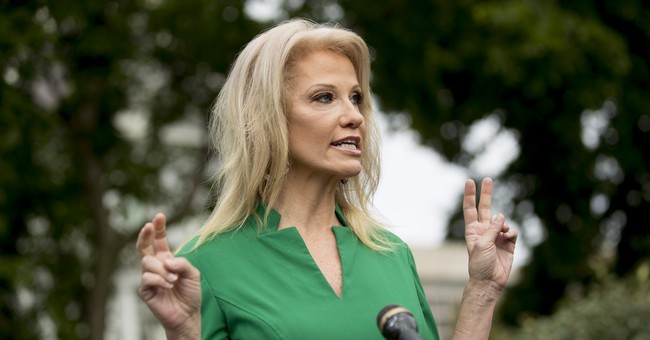 Kellyanne Conway, former senior advisor to then-president Donald Trump, will release a new book Tuesday called “Here’s the Deal.” In the nearly 500-page tome, she touches on a range of issues from Jared Kushner’s bloated ego to her opinion that Dr. Anthony Fauci was “slow” to respond to the COVID crisis. She also shares what she really thinks about her frankly bizarre marriage.

The Washington Post obtained an advance copy of the book.

As an aside, I always laugh when newspapers say they “obtained” an advance copy. I picture a guy in a fedora lurking around a back alley with a cigarette, waiting for a faceless figure to slip him a book. In reality, publishers readily hand out advance copies to the media, hoping to get some publicity.

But I digress. Let’s get to the good stuff. We’ll start first with Conway’s thoughts on St. Fauci, director of the National Institute of Allergy and Infectious Diseases and Chief Medical Advisor to the current President. As we mentioned she called him “slow” in responding to the virus, but she also nails him good on mask hypocrisy:

No masks was standard fare in the White House Situation Room, where Dr. Fauci was more likely to wear ‘Dr. Fauci’ socks than a mask. Then, like magic, when D. Myles Cullen, the vice president’s photographer, came into the room, masks would suddenly appear.

Why does Fauci’s hypocritical behavior not surprise me? It’s that kind of duplicity that made so many people lose faith in our government’s COVID responses.

Although she was rough on poor Tony, Conway notably does not go after Donald Trump, unlike so many presidential advisors who make millions penning books trashing their former boss.

“Donald Trump had elevated and empowered me to the top of his campaign, helping me crack glass ceilings that had never even been dinged before,” she writes, adding that “angry feminists” should “have at least once in their lives a ‘girl boss’ as generous, respectful, engaging, and empowering as Donald Trump was to me and my other female colleagues.”

Her kind words for Trump do not extend to Jared Kushner, Trump’s son-in-law and former adviser. She homes in on his massive sense of self-importance:

“There was no subject he considered beyond his expertise. Criminal justice reform. Middle East peace. The southern and northern borders. Veterans and opioids. Big Tech and small business,” she writes. “If Martian attacks had come across the radar, he would have happily added them to his ever-bulging portfolio. He’d have made sure you knew he’d exiled the Martians to Uranus and insisted he did not care who got credit for it. He misread the Constitution in one crucial respect, thinking that all power not given to the federal government was reserved to him.”

Oof, that’s gonna leave a mark. Conway also delves into the matter that remains a mystery to any who have followed it: how she has stayed married to that odious little creature George Conway, a Never-Trumper and former member of the race-baiting Lincoln Project. As George’s criticism grew more pronounced during Trump’s term, Conway felt the pressure:

For the first time since George and I had gotten serious, I was looking at the possibility that the man who had always had my back might one day stab me in it.

Count on it, Kellyanne. She goes on to describe how she felt like George was having an affair–just with Twitter, not another woman. It would appear that love story continues to this day:

The marriage may not have the turbulence of Johnny Depp’s and Amber Heard’s, but boy, it sure is weird. I don’t think my marriage would too last long if my wife spent her days viciously criticizing my boss.

The book ends on a note that’s happy for the country, but maybe not so much for Georgie. “Democracy will survive. America will survive,” she writes. “George and I may not survive.”

I think you just got your walking papers, pal.