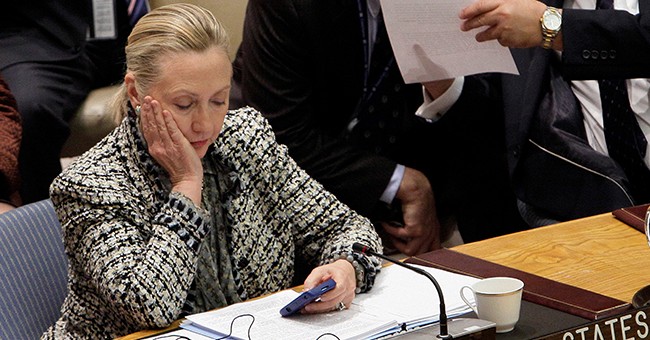 Michael Sussmann’s defense took another hit with the testimony of two former CIA employees on Friday.

Sussmann has been charged with lying to the FBI about not representing a client when he funneled the Alfa Bank smear against Donald Trump to the FBI-while actually representing the Clinton campaign and tech executive, Rodney Joffe.

Durham has shown that Sussmann billed the Clinton campaign for the meeting that he had with James Baker at the FBI. Marc Elias, Sussmann’s partner at the time, also testified that they were representing the Clinton team and had hired the Fusion GPS to help dig up dirt on the Trump team. Durham also got in other records during Elias’ testimony showing that they were meeting on the Alfa Bank, and Elias said that he considered his work with Sussmann and Joffe to be part of his Clinton campaign work.

Then James Baker testified that when Sussmann came to him with the information, he said that he wasn’t representing a client. Durham produced a text from Sussmann telling Baker that he wasn’t representing a client. Then Baker testified that he likely wouldn’t have taken a meeting with Sussmann on the allegations, if Sussman had admitted he was representing the Clinton campaign. That helps to show the “materiality” of the lie, which is another element of the charge that the prosecution has to prove. Had he not lied, it likely would not have gone further. But instead, it was referred out to be investigated and the FBI debunked it as nonsense.

But Durham had even more support to suggest a pattern.

Sussmann also went to the CIA with the information in February 2017, according to the two CIA employees — Kevin P. and Steve M who testified on Friday in the trial. Sussmann passed them two thumb drives, just as he had to Jim Baker with the Alfa Bank allegations. Once again, he said that he was “not representing any client,” witness Kevin P. testified. Sussmann also told them he had given “similar” information to the FBI.

Sussmann previously reached out to CIA official Mark Chadason, who is now retired and who also testified. Sussmann told Chadason he had information about a national security issue. According to Chadason, Sussmann told him he did have a client but that it was a Republican.

All this tends to show that going to the FBI wasn’t just a random act but a continuing effort to get the information spread, and that Sussmann wasn’t being straight about the Clinton or Joffe connections in the process. It wasn’t just a one-off or him acting randomly. The defense seems to be trying to claim that he wasn’t doing that as part of his representation, but that’s a pretty thin reed on which to stand, given the facts, and this just kicks the legs out under that effort.