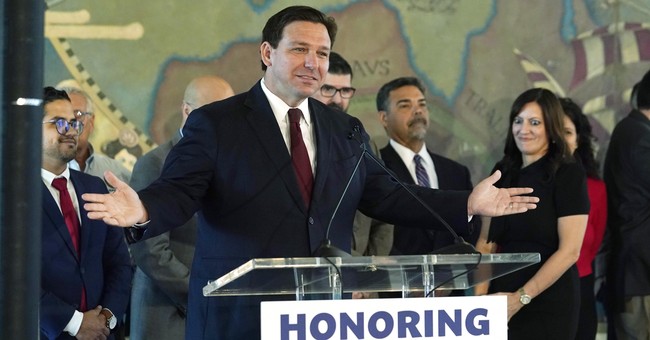 The rise in popularity among leftists – especially with younger generations – for admitted socialists like Sen. Bernie Sanders (I-Vt.) and Rep. Alexandria Ocasio-Cortez (D-N.Y.) has been a cause for great concern with Republicans including Hispanics who reside in South Florida who are all too familiar with the brutal regimes in the Communist countries from which they and their ancestors fled, like Cuba.

In fact, the growing concerns among those same South Floridians for the growing acceptance of communistic/socialistic ideals within the Democratic party are in part what has helped Republicans like former President Donald Trump thrive in the state, with Trump winning it in both 2016 and 2020 to the great dismay of Democrats who once treated Florida like it was their back pocket.

It’s also greatly aided in the popularity of Gov. Ron DeSantis, who has made it a point during his time in office both as a member of Congress and as Governor to denounce communism and socialism and express solidarity with those in his state and around the world who have experienced its evil brutality firsthand, as he did last Monday when he signed into law a bill that established November 7th as “Victims of Communism Day” in the state.

During a public appearance Tuesday in Miami to announce cancer research funding, DeSantis briefly took aim at the Biden administration for easing some of the U.S.’s sanctions on Cuba and Venezuela, which DeSantis correctly pointed out will help no one but the dictatorships.

“I think we’ve seen this song before,” DeSantis said, according to the Tallahassee Democrat. “That is going to increase the amount of money that’s going to the dictatorship.”

At one point during the event, a reporter asked DeSantis how he felt about an outspoken Democratic state legislator and admitted socialist – Rep. Carlos Guillermo Smith – recently comparing him and his administration to regimes like Castro’s in Cuba and Maduro’s in Venezuela.

DeSantis put on an absolute clinic in response, providing a good blueprint for other Republicans to use in the months ahead as Democrats continue their disturbing march towards socialism:

“I think it’s a slap in the face to everybody in South Florida that has experience with these Marxist dictators in our hemisphere,” said DeSantis. “You have people who were driven out of the island of Cuba. You have people that it’s so bad the oppression there that they would get on a raft and go 90 miles over shark-infested waters to be able to get to freedom.”

“So to equate Florida, which is viewed not only in our country but even around the world as a beachhead of freedom, to equate that with those regimes just shows that you have no idea what you are talking about.”

“I realize that there may be some people in the state of Florida, not in my party, but some others, politicians who have a soft spot for dictatorships like in Cuba, they have a soft spot for people Maduro and Ortega,” said DeSantis. “I have contempt for those views because those do not represent the values of the state of Florida, but particularly the values of the people of South Florida.”

Watch his full unedited remarks below as he just rips into Smith, detailing what South Floridians fled from not just in Cuba and Venezuela but also Nicaragua and others he said are heading in that direction:

That is how it’s done, and it’s not something Joe Biden would be able to effectively counter should the issue come up in a presidential debate between the two in 2024 (assuming DeSantis runs).

At the rate Florida Democrats are going, especially among the Cuban-American population, the state is likely lost to them for the foreseeable future, as some Democrats have reportedly acknowledged in private – unless the few sane ones left can manage to pull off a miracle and drag their younger members away kicking and screaming from the socialist abyss.

But that’s unlikely to happen, which will mean more GOP victories in future elections at the state and local levels that will have the national party pulling their hair out for a long time.