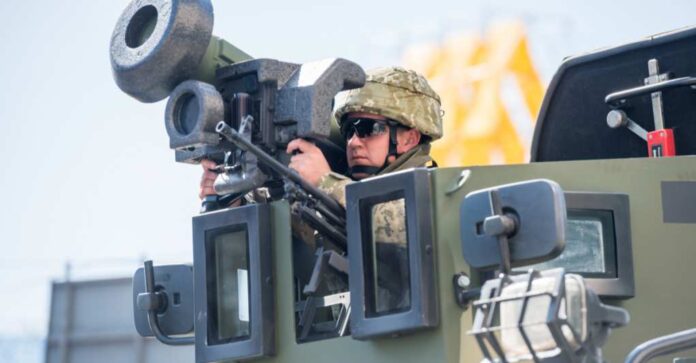 With the conflict happening between Ukraine and Russia over the past few months, you’ve likely heard about Javelin missiles on more than one occasion. So, it’s time to answer a few questions. What are they and why do the Russians fear this weapon?

Javelin missiles are lightweight enough to be transported by individual members of the military. They are fired from the shoulder and are capable of creating a significant amount of damage.

These missiles are developed by U.S.-based company, Lockheed Martin, a long-term defense contractor.

One of the reasons why the Javelin is popular is because there’s an automatic guide so that the missile can reach its target once it has been launched. This allows the gunner to take cover so that they don’t have to worry about counterfire.

Depending on what is going on, soldiers or marines have the ability to reposition after a launch or reload in order to address other threats in the area.

We have been sending out a number of Javelin missiles to Ukraine over the past several months. In fact, we’ve sent so many over that we’ve depleted approximately 25% of our own reserves.

When Russia invaded Ukraine back in February, Putin didn’t expect such a fight. Ukraine has been willing to fight – and they’ve been lasting as long as they have as a result of the weaponry and ammunition that have been provided to them by the U.S. as well as other ally nations.

The Javelin has been capable of taking out Russian tanks.

There are a few different models out there, though the FGM-148 is the one that is what’s currently available – and an upgrade known as the 148G is also in the works.

Some users have even decided that this missile, operated by the infantry, was worthy of a nickname – Saint Javelin, Protector of Ukraine.

The missile gets spring-ejected from the Command Launch Unit, and it can reach a target that is about 1.5 miles away. The warheads are capable of exploding upon impact – and this is when things get serious. They are capable of penetrating up to 23.5 to 21 inches of steel.

As for accuracy, the Javelin hits the mark almost all the time – and with the Command Launch Unit attach, the target can be magnified up to four times for enhanced accuracy. And, various night sights and other optical devices can also be used.

The Ukrainians have fallen in love with the Javelin because it is helping to keep up with Russia. And that, right there, is why the Russians absolutely hate to see this missile in play. They are losing a lot of good tanks and other weaponry to these infantry-held missiles. Without the Javelin in play, Russia would have likely already defeated Ukraine, allowing Putin to move on to another unsuspecting country like Poland or Finland.

There’s really only one complaint that comes from the Ukrainians about the Javelin – there’s not enough of them. There’s a reason for that, too – they’re both expensive and time-consuming to produce. As a result of some of the supply chain shortages, it’s not possible to replenish the Javelin reserves as quickly as Ukrainians are blowing through them.

Luckily, Ukraine does have some other anti-armor weapons that are making a difference in the war, too.

As more people learn about the effectiveness of the Javelin, it’s likely that Lockheed will have its hands full with new orders for a long time…