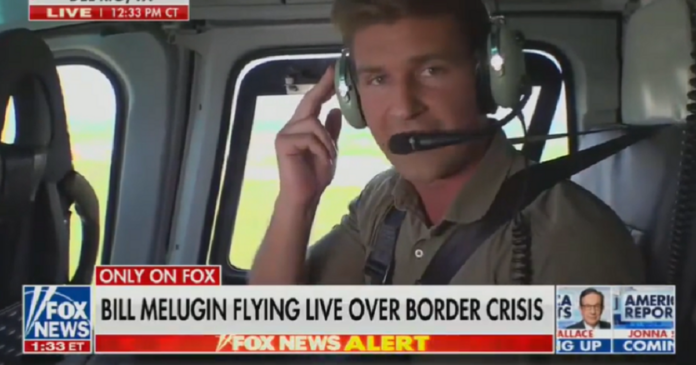 Left-wing organization Media Matters for America threw down a hit piece on Fox News reporter Bill Melugin Tuesday, calling him “a far-right propagandist masquerading as a neutral, disinterested voice.” Funny, because I thought Melugin was the only national reporter down at our southern border actually reporting what’s happening down there. I didn’t realize telling the truth made him a “far-right propagandist.”

I’m betting they also wanted to call him a “racist” and “white supremacist,” but didn’t have room in their headline.

Media Matters calls itself “a web-based, not-for-profit, 501 (c)(3) progressive research and information center dedicated to comprehensively monitoring, analyzing, and correcting conservative misinformation in the U.S. media.” It was founded in 2004 by a real sweetheart–David Brock, a former conservative and nemesis of the Clintons, who in 1997 abruptly changed his right-leaning views to become a full-on, frothing-at-the-mouth leftie.

“The reason why I was an investigative reporter for six years before I started at Fox News is because I like shining light where others don’t want it,” he [Melugin] told [Fox contributor Jason] Chafetz (sic) in December, adding, “My job is to afflict the comfortable and comfort the afflicted.” This framing allows him to launder pro-cop, anti-immigrant propaganda into the news cycle with a veneer of objectivity.

Note to the numbskulls at Media Matters: Chaffetz is spelled with two f’s. (I have a screenshot for evidence, if they change it.)

Here’s the “take-down” video they post along with the article:

Oooh, got him good! He said Border Patrol morale was down-that proves um… well, something.

Anybody who thinks that morale at the Border Patrol isn’t in the toilet under the Biden Administration is living in an alternate universe. This video proves nothing except that Melugin is A) down at the border, where no other national reporter nor the President of the United States can be bothered to visit, and B) He’s reporting what he’s seeing on the ground.

Melugin joined Fox News in May 2021, and since has been a fixture, reporting over 400 times on the explosion of illegal aliens crossing the border as well as the difficulties Border Patrol officers face.

The article goes on and on and on–I’m not kidding, this drivel clocks in at over four thousand words-and mostly just repeats various ad hominem attacks. If he reports something a law enforcement officer told him, it means he “excels at manufacturing what left-wing activists call copaganda…” God forbid you should ever report on a cop.

I could go on and list every charge they throw at him, but who has time to read this propaganda? You can tell who you’re dealing with just by reading their last sentence: “…if Melguin (sic) doesn’t want to be characterized as a white supremacist in the future, he should probably stop working for a company run by them.” Ah, yes, when you’ve got nothing else, just throw the white supremacist slur at him. You knew it was coming. And try spelling his name right next time. Hint: it’s not “Melguin.” It’s Melugin. Maybe that’s why they didn’t tag him in their courageous tweet.

You know you’re doing a good job when the leftist media comes after you. Watch his reporting yourself. Does it seem like the work of “a far-right propagandist masquerading as a neutral, disinterested voice?” Seems to me he’s simply telling us what he’s seeing right in front of him: