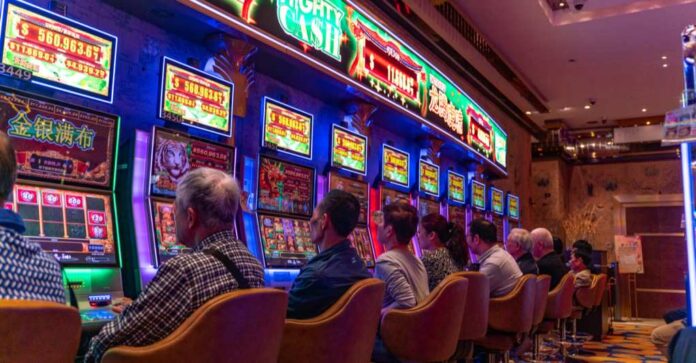 When Americans are having problems making ends meet, they are stuck making some very difficult decisions. While many choose to watch their spending, cut out little extras, and even buy off-brand products, many choose to use some of that money to make more money by gambling. The problem is this money rarely pays out, and as a result, the casinos keep making bigger profits.

March set a new record as casinos reported a total of $5.3 billion in profits for March. The previous record of $4.92 billion was set back in July of 2021, right as some casinos were seeing their first customers in over a year due to COVID restrictions. This translated to the best first quarter ever, while falling just short of the $14.35 billion quarterly record. Three states set quarterly records as well.  Arkansas ($147.4 million); Florida ($182 million), and New York ($996.6 million). The interesting part here is these tribal casinos make up the Florida and New York casino industry, but their profits are reported separately.

The American Gaming Association is in charge of reporting these impressive figures as well as the unfortunate news of places like Atlantic City failing to even return to pre-pandemic levels of gambling, much less reports of record profits.

Bill Miller, the association’s president, and CEO is incredibly optimistic. “Consumers continue to seek out gaming’s entertainment options in record numbers…despite continued headwinds from supply chain constraints, labor shortages and the impact of soaring inflation.” This choice is an incredibly profitable one for not only the casinos themselves but for the state and local jurisdictions as well.

Reports like these provide new information that breaks down these figures, and they are incredibly impressive. Inside the report, it detailed how the commercial casinos paid out a record-breaking $11.69 billion in direct gambling tax revenue to state and local governments throughout 2021. This represents a 75% increase from 2020 as well as 15 percent from 2019. While the 2020 figure looks more impressive, the comparison with 2019 is more of an apples-to-apples comparison as so many locations were forced to close at some point during 2020. Omitted from these figures are the income, sales, and other tax figures.

These figures are representative of what the casino industry has reverted to; a license to print money. Many of these states do not require transparency on the payback rates for the slot machine and video poker that are so popular with many gamblers. This means gamblers are playing blindly and stuck choosing machines, bet levels, and denominations off intuition. While the payback tables do not guarantee wins as they are calculated over a long period of play and multiple machines, they can provide a slight edge when used right with the right timing.

Casinos are springing up everywhere. From gas station “games of chance” slot machines in Georgia to the inclusion of sports betting apps on your smartphone. They are doing their damndest to bring gambling out of back-alley places that require a secret knock, to the mainstream.

Places like the Hard Rock Café Hotel and Casino in Miami and Tampa, Florida attract both gamblers and families alike. With uniquely designed and decorated properties operating in conjunction with huge warehouses full of memorabilia and five-star restaurants, they have something for everyone.

They know once you get that dopamine rush from the bells and lights, you’ll keep playing. And the house always wins in the end.