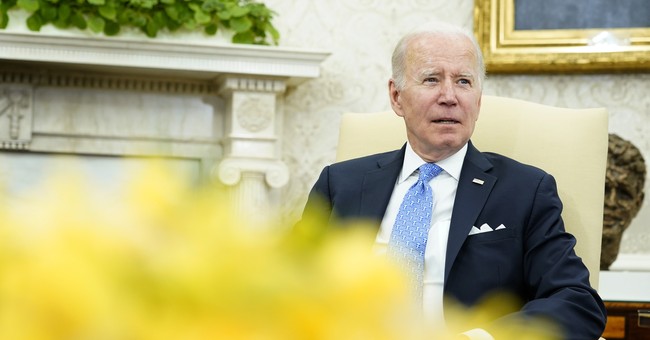 We’ve documented numerous instances of Joe Biden’s handlers stepping in to rescue him from the press and their questions since well before he was sworn into office. But some are more noteworthy and concerning than others, and one that took place during a White House event Monday fits the bill.

Biden held a bilateral meeting earlier in the day with and then hosted an event honoring Greece’s Prime Minister Kyriakos Mitsotakis (which were both billed on the White House schedule as events featuring the prime minister of the “Hellenic Republic”). Before the meeting got underway, Biden met publicly with Mitsotakis in the White House where a “pool spray” was also held.

Pool sprays typically consist of a small group of reporters and photographers who are assembled to take photos and videos of the superficial proceedings, which presidents oftentimes find beneficial to their global images. At all of them, questions are usually shouted out towards the end, with some presidents like former President Trump tending to engage the reporters, while much more sheltered presidents like Joe Biden frown on them because contra to what he stated on the campaign trail, he’s not a fan of engaging the press.

For instance, Biden once infamously and disgracefully said during a pool spray with India’s Prime Minister Narendra Modi that the PM should not take questions from the American media because “the Indian press is much better behaved” than them because the U.S. press “won’t ask any questions on point.”

In the latest instance of the Biden Hideout Plan being activated, both Biden and Mitsotakis had wrapped up their public “meeting” when some of the members of the pool spray began yelling out questions to Biden, with one of them being about the war of words between Amazon founder/Washington Post owner Jeff Bezos and the White House.

Instead of answering, Biden just sat there and laughed and watched while his handlers literally screamed at reporters to get out of the room.

Watch the disturbing display below:

Yikes. That may be the loudest I’ve ever heard them yelling.

These incidents are always a terrible look for a man who has portrayed himself as a proponent of respecting the freedom of the press. But they are especially terrible looks when they happen in front of world leaders, which was the case today, during the event with Modi, and also one disturbingly similar one with U.K. Prime Minister Boris Johnson where Biden’s handlers actually cut off reporters from asking Johnson questions, all because they were afraid that the media would then turn to Biden for questions. The next day, the Biden White House actually blamed Johnson for the supposed “confusion” around the moment.

As I’ve said before, this is just pathetic and, sadly, there appears to be no end in sight.

Biden just never appears to have it together, and though it’s understandable from a political perspective why his handlers would want to hide him from the press and the public as much as they can to avoid catastrophic interactions, from a governing and leadership perspective, it’s just downright terrifying. Needless to say, this is not how any of this is supposed to work.

But on the bright side, there are no mean tweets anymore, so at least there’s that to be thankful for – or so we’ve been told, anyway.