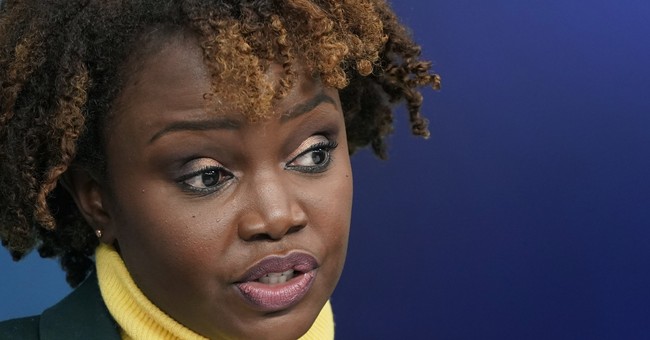 Newly-appointed White House press secretary Karine Jean-Pierre had a rough start to her new position on Monday in an exchange with Fox News’ Peter Doocy. During a press conference, the reporter asked her about President Joe Biden’s recent comments on the economy when he suggested raising taxes on large corporations would somehow alleviate the inflation problems Americans are experiencing. What followed was one of the most embarrassing moments one might see at a White House press briefing.

During the exchange, Doocy asked: “The president’s Twitter account posted the other day. ‘You want to bring down inflation? Let’s make sure the wealthiest corporations pay their fair share.’ How does raising taxes on corporations reduce inflation?”

Jean-Pierre gave a meandering response that did not even come close to answering Doocy’s question. “Well, you know, we have talked about…we have talked about this this past year about making sure that the wealthiest among us are paying their fair share,” she stammered. “And that is important to do. And that is something that, you know, the president has been working on every day when we talk about inflation and lowering costs. And so it’s very important that, you know, as we’re seeing costs rise, as we’re talking about how to, you know, build an America that’s safe, that’s equal for everyone and doesn’t leave anyone behind. That is an important part of that as well.”

After trying to consume that word salad, Doocy pressed, asking again how raising taxes on corporations would “lower the cost of gas, the cost of a used car, the cost of food for everyday Americans.”

Jean-Pierre gave it another shot:

“So, look, I think we encourage those who have done very well, right? Especially those who care about climate change to support a fairer tax code. That doesn’t change. It doesn’t charge manufacturers, workers, cops, builders a higher percentage of their earnings that the most fortunate people in our nation and not let that stand in the way of reducing energy costs and fighting this existential problem, if you think about that as an example. And to support basic collective bargaining rights as well. That’s also important. But look, it is, you know, by not without having a fair tax code, which is what I’m talking about, then like manufacturing workers, cops. You know, it’s not fair for them to have to pay higher taxes than the folks that who are who are who are not paying taxes at all.”

Doocy, undeterred, continued pushing for an actual answer to his question. “But what does that have to do with inflation?” he asked. He pointed to Amazon founder Jeff Bezos’ response to Biden’s tweet suggesting that raising taxes on corporations will solve the inflation problem. He noted how Bezos suggested the new Disinformation Governance Board should flag Biden’s tweet as misinformation.

Jean-Pierre answered again, probably hoping the third time was the charm. She said:

Does any of that sound familiar? If you have been keeping up with the feud between Bezos and the White House, it should. Jean-Pierre’s response was almost word-for-word the text of a statement released by the White House in response to Bezos’ criticisms. She was reading from the actual statement at the podium in an attempt to address Doocy’s question. In fact, during most of the conference, she had her eyes buried in her binder, reading off her notes to respond to questions.

This wasn’t exactly a good showing for Jean-Pierre. But in her defense, there are two factors I will acknowledge. For starters, she’s new to the job and is not practiced enough. This will likely improve over time. But secondly, spinning her boss’ ridiculous comments in a way that makes sense to the American public is about as easy as getting Rep. Eric Swalwell to say something intelligent, for a change. Even Psaki would have been forced to “circle back” when asked how raising taxes on corporations would solve the inflation problem.