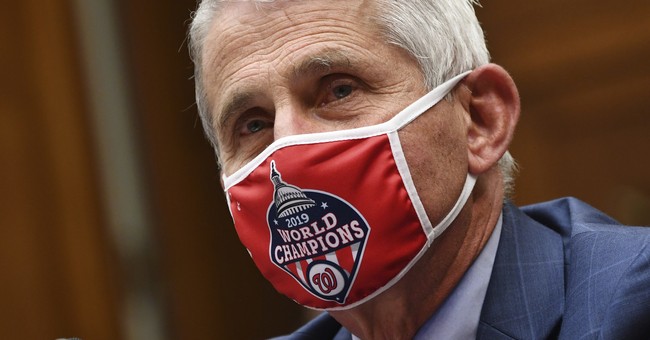 White House chief medical adviser Dr. Anthony Fauci said on CNN Sunday that he would not serve in that capacity should Donald Trump regain the White House in 2024. Note to Dr. Fauci: Trump would not ask you to serve and would, in fact, probably kick you to the curb his first minute back in office.

The top doc, interviewed by Trump-hater Jim Acosta, simply laughed and said, “well, no” when asked if he would work for the Don again. He added:

“If you look at the history of what the response was during the administration, I think, you know, at best, you can say it wasn’t optimal. History will speak for itself about that.”

The COVID response has been pretty awful since Trump left office, however, so the argument blaming Trump for everything falls flat. In fact, one of the few constants in the pandemic has been the ubiquitous television appearances of Fauci. He’s been in charge since the start of the virus, and it hasn’t gone well. More COVID deaths actually have occurred under Biden’s watch than Trump’s.

He also claimed it was “a liberating feeling” to work for Biden instead of Trump. I’m guessing that’s because Trump actually tried to keep America as normal as possible, while the Biden administration can regularly be expected to rubber-stamp virtually any repressive policy that Fauci proposes.

Fauci further explained why it was so triggering to work for Trump:

“I can tell you I take no pleasure at all in being in a situation of contradicting the president, so it was really something that you didn’t feel you could actually say something and there wouldn’t be any repercussions about it,” he said then.

“The idea that you can get up here and talk about what you know, what the evidence and science is, and know that’s it — let the science speak — it is somewhat of a liberating feeling,” Fauci added.

Therein lies the real problem with his rhetoric. Fauci hasn’t always followed the science; rather, he often flouts it. He started lying almost immediately during the early days, claiming to know with certainty that Wuhan was a natural virus when in fact there was evidence that it was lab engineered.

Mr. “I Am the Science” also claimed in March 2020, during the early stage of the pandemic, that we shouldn’t wear masks. “There’s no reason to be walking around with a mask,” he explained.

Turns out he was lying: He was hoarding the masks for doctors.

Who can forget Fauci saying “15 days to stop the spread?” (Yes, Trump backed the recommendation, but it was Fauci and Co. who recommended it.) It’s now been well over 850 days and we’re still living with it, and toddlers in New York City are still forced to wear masks to school. Meanwhile, the Biden Administration still hasn’t rescinded its national COVID public health emergency. Overdoses meanwhile shot up 15 percent last year. Coincidence? I think not. Being under lockdown for months doesn’t do great things to people’s mental health. RealClearPolitics sums up the failures devastatingly:

Then … wait for it … numerous studies showed the lockdowns in Europe and the U.S. had virtually zero benefit.

The list of Saint Fauci’s lies and mistakes goes on. If Trump runs again and wins, Fauci would be canned in a heartbeat, so his comments are disingenuous at best. We would roundly applaud his decision to leave if Trump wins, and would, in fact, be thrilled if he just walked away from the job right now.