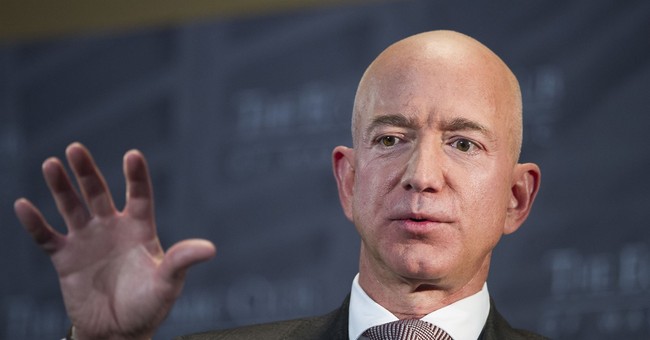 We may be seeing the beginning of the elite throwing Joe Biden under the bus.

I wrote on Saturday about Amazon and Washington Post owner Jeff Bezos calling out Joe Biden’s false comment that he could reduce inflation by taxing corporations more.

This revealed Joe Biden’s ignorance about economics on what the cause of inflation is and what would stop it. Not to mention that if you did this, it would likely cause prices to go up more, as corporations would pass on the additional taxes in increased prices on their products. So, it would make inflation worse. But Joe doesn’t understand that. Or simply doesn’t care, because it fits his narrative.

What was astonishing was to have Bezos bust what Biden said as false.

“The newly created Disinformation Board should review this tweet,” Bezos sniped. “Or maybe they need to form a new Non Sequitur Board instead. Raising corp taxes is fine to discuss. Taming inflation is critical to discuss. Mushing them together is just misdirection.”

Fascinating that he not only said it was wrong and busted him on the Disinformation Governance Board, but that he called it “misdirection” as well, saying Biden is being deliberately deceptive. We of course know that, but intriguing that Bezos is saying it.

Now, in case you thought it was just a random comment, Bezos continued busting Biden on Sunday, as well. He responded to a comment from someone contesting Biden’s claim that he reduced the deficit, saying that Biden didn’t do anything to reduce the deficit. Bezos agreed and added to it.

“In fact, the administration tried hard to inject even more stimulus into an already over-heated, inflationary economy and only Manchin saved them from themselves,” Bezos said, hitting the nail right on the head. “Inflation is a regressive tax that most hurts the least affluent. Misdirection doesn’t help the country.”

Wow, now that’s some full-on truth, and once again, he’s not just saying Biden is ignorant, he’s saying Biden is being deliberately false with the term “misdirection” again. It’s also a statement about Manchin, which is going to earn Bezos some ire from those on the left. They’ve painted Manchin as the devil incarnate stopping all their dreams, as opposed to the pragmatic Democrat he is, seeing that Democrats are going to lose their control of Congress in November and having some principles about bipartisanship.

So, did Bezos suddenly figure out what “Brandon” was all about? Or is it more that he sees that the winds are changing, that Americans can’t stand Biden and are about to toss Democrats out of power on their ears in the Congress come November, so he’s trying to re-position himself? I wouldn’t trust him as far as I can throw him, but it’s good to hear that he’s throwing Biden under the bus. If he wants to do some penance, he has a platform from which he could finally run some op-eds with a little truth, a platform that has unfortunately been used in the past to get us into this mess that we are now in with Biden.