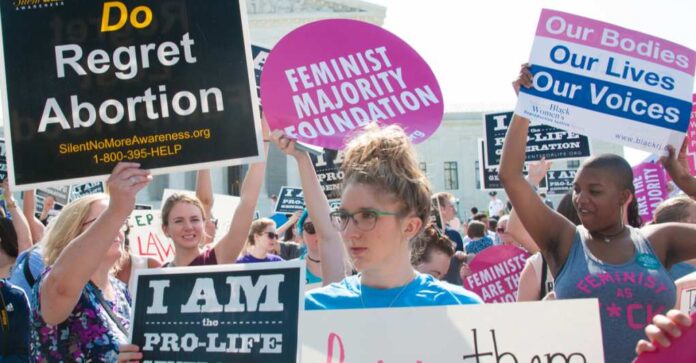 I am sure you know that there is quite a big to-do going on in Washington right now over the abortion case the U.S.Supreme Court is currently deliberating. Of course, this was only made even more controversial last week when a “draft decision” was leaked to the public.

The draft, which is basically just the opinion of a few of the justices, and definitely not a final ruling, indicated that the court could indeed be leaning toward the idea of overturning the infamous Roe v. Wade case of 1973 that made abortion legal in the United States.

Naturally, the political left is all up in arms over the possibility. And many have taken to the streets in various cities to protest. As with any type of peaceful protest, there is nothing wrong with this. After all, it is an expression of their First Amendment rights.

However, when those protests end up in front of the private homes of certain SCOTUS justices, a line just might be crossed.

Over the weekend, several of the abovementioned protests popped up, congesting the sidewalks, streets, and even the yards of none other than Chief Justice John Roberts and Justice Brett Kavanaugh’s private homes. And more are said to be planned for upcoming days by groups such as Ruth Sent Us.

So far, things have been rather docile, minus a few death threats and such. However, it has still given local law enforcement real reason to be concerned. They even moved Justice Samuel Alito, the author of the leaked draft, and his family to an undisclosed location for their safety.

The question is, has a line actually been crossed?

The answer is a resounding yes for many, as there is a very real federal law that essentially bans such activity, no matter how “peaceful.”

This statute is quite clear that intimidating judges in any court are strictly prohibited.

It reads, “Whoever, with the intent of interfering with, obstructing, or impeding the administration of justice, or with the intent of influencing any judge, juror, witness, or court officer, in the discharge of his duty, pickets or parades in or near a building housing a court of the United States, or in or near a building or residence occupied or used by such judge, juror, witness, or court officer, or with such intent uses any sound-truck or similar device or resorts to any other demonstration in or near any such building or residence, shall be fined under this title or imprisoned not more than one year, or both.”

I mean, it doesn’t get much clearer.

And don’t you tell me for a second that the point of standing in the yard of a SCOTUS justice and chanting with a sign isn’t to intimidate or influence a said person.

The political left can’t very argue their way out of this either, as a very similar law is currently being used against a number of so-called insurrectionists who took place in the protests at the Capitol Building on January 6, 2021.

As conservative writer Cassandra Fairbanks has noted, more than a few of those detained for being at the Capitol that day have been charged with violating 40 USC § 5104, which bans ‘parade, demonstrate, or picket in any of the Capitol Buildings.’Others were charged with violating 18 US Code § 1512, which prohibits anything that ‘otherwise obstructs, influences, or impeded any official proceeding, or attempts to do so.’

They can’t very well ignore the actions of their party members if they are the exact same as those they see as the enemy, can they? Neither can they charge conservatives for doing something they themselves are doing or at the least agree with. I mean, the White House hasn’t even condemned these protests yet.

Then again, they’ve been expressing this same sort of hypocrisy for years. I mean, there’s a reason they say the Democrats only have standards because they have a double standard…

To make matters even more ridiculous, should the “draft” be made into an official decision, it wouldn’t ban abortion as many of these protesters seem to think. Instead, it just gives the decision on abortion to go to the states and their elected officials instead of the federal government.

Maybe we should start calling them ‘dramacrats.’ They are all about the drama and don’t care one wit about democracy.