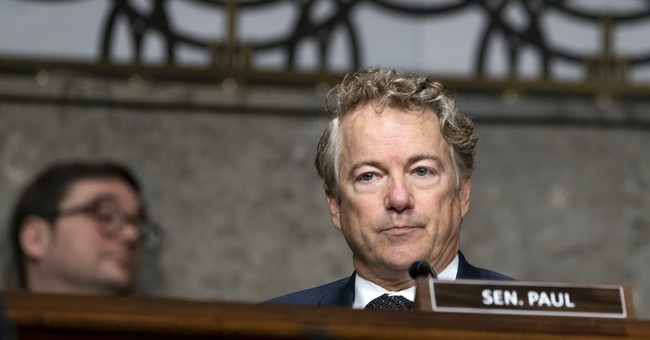 “You shouldn’t shove all $40 billion out the door without any oversight. And having a special inspector general, we did it in Afghanistan–it didn’t stop all the waste–it at least makes the thieves think twice about stealing the money.” — Kentucky Senator Rand Paul (R).

While Americans are facing fuel and food shortages — and haggling with the Biden administration over the scarity of baby formula — they’re being told, even by Republicans, that sending billions overseas to Ukraine is what they should be caring about. “[T]he most important thing going on in the world right now,” as Kentucky Senator Mitch McConnell put it Tuesday.

And so, despite weak opposition by some GOP members due to the rushed timeline, the House passed the aid package Tuesday.

The House on Tuesday night passed a $40 billion military and humanitarian aid package for Ukraine in an overwhelming 368 to 57 vote, weeks after lawmakers overwhelmingly approved $13.6 billion in emergency aid for the war effort. That total — roughly $53 billion over two months — goes beyond what President Biden requested and is poised to amount to the largest foreign aid package to move through Congress in at least two decades.

The result has been that, at least for now, Congress is quickly and nearly unanimously embracing historic tranches of foreign aid with little public debate about the Biden administration’s strategy, whether the volume of military assistance could escalate the conflict, or whether domestic priorities are being pushed aside to accommodate the huge expenditures overseas.

While nearly 60 Republicans opposed the bill, only a handful of spoke up to outline their concerns with the legislation, arguing that the United States could not afford to spend so much abroad at a time when they argue the basic needs of American citizens are not being met. Only Republicans opposed the measure, citing its size and the rushed timeline.

“I think we’d all agree the most important thing going on in the world right now is the war in Ukraine,” said Senator Mitch McConnell of Kentucky, the minority leader, recounting a recent phone call with Mr. Biden in which he said he had advised the president that the package should “move by itself and quickly.”

As the bill moved to the Senate, McConnell’s colleague from his home state, however, decided to literally stand and resist a quick vote to bring attention (presumably) to the size and scope of the bill.

Paul had originally wanted to include language in the rushed bill that would give the Special Inspector General for Afghanistan Reconstruction oversight. Sen. Chuck Schumer (NY-D) noted that Paul wanted to include new language without holding a vote. “When you have a proposal to amend a bill, you can’t just come to the floor and demand it by fiat,” Schumer said. McConnell, who many conservatives questioned following news he considered aid to Ukraine of paramount importance, said Paul is in the minority in his demand to amend the bill.

Mr. McConnell said he understood Mr. Paul would like changes to the bill, but those changes are not acceptable to the majority. “I think there’s a simple way to solve this: Vote on Sen. Paul’s amendment. And then we should pass the supplemental. And we should do it today.”

So Rand Paul, whether he’s grandstanding or not (and he certainly has his critics who see a bit of spotlight-hunting in these kinds of efforts) may not be able to keep his colleagues from sending billions to Ukraine during a time of worsening economic crisis at home, but at least he can force a vote on it, even if he may not like the result. Which is generally good for Democracy.