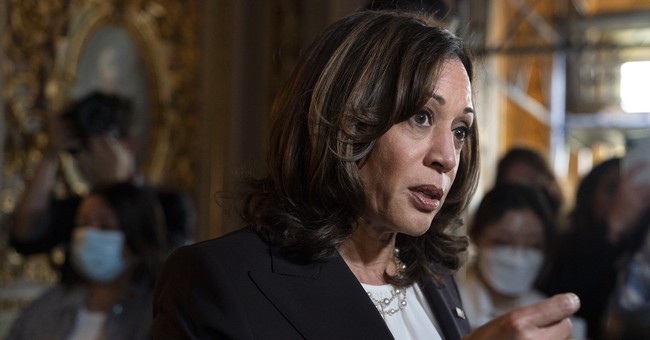 On Wednesday, Sen. Majority Leader Chuck Schumer announced he was holding a procedural vote on the “Women’s Health Protection Act of 2022,” a bill which he and his fellow rabidly pro-abortion Democrat colleagues have claimed will merely “codify” Roe v. Wade into law, but which in reality is much more extreme and dangerous on a number of fronts as explained here.

Considering Sen. Joe Manchin (D-W.Va.) gave a very public and emphatic “no” when asked if he would support the bill, it was known in advance that the whole stunt would be an epic and embarrassing failure. Yet Schumer proceeded anyway, reportedly requesting Vice President Kamala Harris to preside over the vote, apropos in a weird way considering her growing list of failures to date on other important matters including the security of our southern border.

After Democrats failed 49-51, Harris took to the Twitter machine to post a characteristically cringe video clip showing her in her best Very Concerned pose, talking about what happened and encouraging Democrats not to give up the fight:

Though Harris urged people to “be clear here,” she wasn’t actually very clear at all. She claimed that most Americans believe in “a woman’s right to make decisions about her own body,” but the most recent polling available indicates a majority of Americans – women and men alike – believe by comfortable margins that abortions should be banned after 15 weeks:

In other words, that poll – which was done by a polling outlet that is considered Democrat-friendly – upends a helluva lot of Democrat/media narratives about where the country stands on the issue of abortion. Sorry, not sorry, Kamala.

Further, Harris wasn’t “clear” with viewers of the video that the only mention of the word “women” in the entire bill was in the name of it. Everywhere else, the word “woman” is replaced with “person”:

So in a bill that she and they proclaim is for the protection of so-called “women’s’ rights,” they couldn’t even be bothered to mention them in a single part of it, instead choosing to go the “woke” route and in the process erasing women from the public lexicon – in a bill that is supposed to be all about women.

While it’s uncertain where Democrats will go from here – will they try to impeach conservative Justices for alleged “perjury” and further encourage the type of dangerous lawlessness we’ve seen take place over the course of the last week and a half in hopes that the efforts will intimidate the Justices? – one thing is pretty clear here:

The leaking of the draft majority opinion written by Supreme Court Justice Samuel Alito (who has had to go into hiding due to threats) on Roe has not been the political winner Democrats have thought it would be. In fact, all signs point to this whole thing backfiring spectacularly on them with voters.

If so, it couldn’t be happening to a more deserving bunch of ghouls. Truly.

Related: The Darker Side of ‘Feminism’ Slithers out in TikTok Rants Fretting Over Roe v. Wade Future