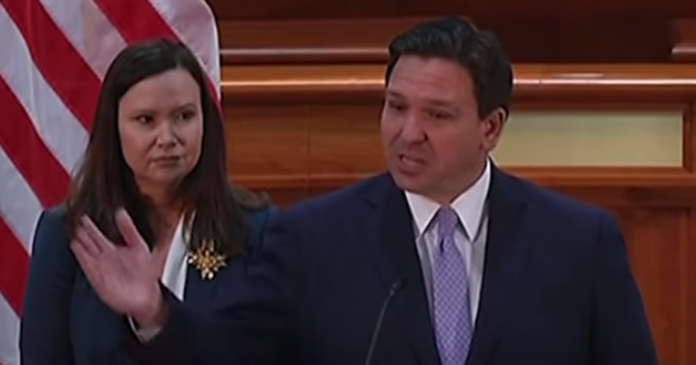 The Democrats in Florida are deeply concerned about the continued successes of Governor Ron DeSantis. The governor is on track to win the upcoming governor’s election for a second time. And there is nothing that the liberals can do to stop his win. The best names that the Democrats have to challenge DeSantis with are Nikki Fried, Charlie Crist, and Annette Taddeo. All three of these people are weak and are not viewed as powerful enough to take down DeSantis.

What the Democrats have to offer is pathetic. Nikki Fried was the pack leader, but her childish attacks on the governor’s family during a hardship have led to her silent demise. Ron DeSantis is a successful governor who people love. And there isn’t a person within the Democratic Party who can successfully beat him in any election.

DeSantis has served the state of Florida for several years and is trusted by people on both sides of the political fence. He does not get worked up over fake story attacks and refuses to be dragged into a liberal debate that would distract him from serving the people.

The state Democrats are scared to death because many of their people are weak and mentally unable to compete with Ron DeSantis. The governor has a direct approach to dealing with people, and it is something that the Democrats cannot handle. And to complicate the issue, many of the Democrat’s national donors are taking their money somewhere else where they think it will make a difference.

Alex Berrios is a man who worked with Biden’s campaign. He stated, “It is becoming serious [for Democrats]. It’s not unsalvageable, but the situation is becoming critical.”

Many Democrats blame their problem on the new maps recently accepted by the state legislature. The Republicans now have a 20-8 majority in the state.

Another big issue with the state that Democrats are on edge about is that the nation dislikes Joe Biden. Every Democrat wishes that they could unhook themselves from the party name because of what Joe Biden has done to its image. The old man promised many things and never delivered on those promises.

Ben Pollara is another Democrat who works as a consultant for the party. He stated, “It is getting more difficult to make the Florida case to national donors. The DeSantis thing is kind of a blessing and a curse. He is perceived as really strong ahead of a potential presidential run, which could scare people off, but also some Democrats really want to knock him off before he gets to that point. That’s really true among the really wealthy progressive donor class. The people who give a lot of money to this stuff are really appalled by the idea of him becoming president.”

The Floridian governor has done a lot to keep the state free and unaltered by the White House’s poison. He has stood up to the liberals and their attempts to kick parents out of the school systems. He has denied the federal government’s attempted state takeover during the pandemic. And He has put Disney in its place ever since they tried to tear down the latest law that protects parental rights.

The Democrats will continue to cry that they cannot get money from national donors because the Republicans are in control. They have never once stopped to think that people will vote for them regardless of how much money they spend on advertisements. They have to put people first and stop trying to control everything. They must bring themselves back to a place where they realize that living in America means freedom and not tyranny.

The best that the liberals can hope for is Ron DeSantis to become the next president. They would finally have a chance to step into the governor’s office after being expelled for the past two decades. But they fail to understand that all the conservatives that once lived up north have since moved to Florida. Their hopes of taking back the state are dim since Florida is now a deep red state.