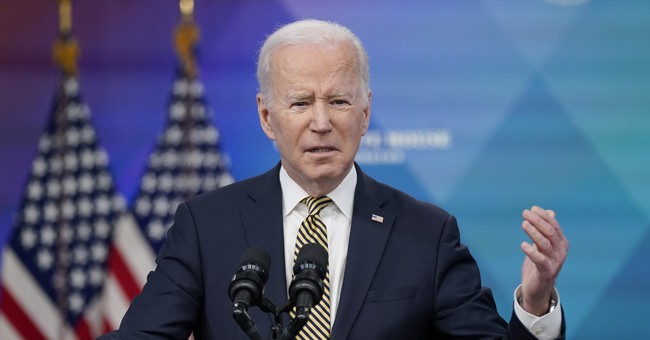 Joe Biden has a lot of issues — from incoherence to not being very bright. I don’t say that last part as a shot but just as an unfortunate statement of fact.

But one of his worst problems is his refusal to ever admit he’s wrong. We saw that reach almost sociopathic levels with Afghanistan. We see it again now with inflation and the economy. None of it is his fault, Joe says. But if he can’t admit where he went wrong, then he can’t fix it and he’ll just keep doing it.

His economy is just terrific, Joe says. What’s the problem then? It’s you. You dumb Americans. You just don’t understand his greatness.

Joe has to help us with our infirmities. “They’re not focused…I think what I have to do is explain in simple, straightforward language what’s going on.”

Of course, we are indeed focused on inflation — we can’t help but be since it’s our money flying out of our pockets. It’s Joe who isn’t focused on it because his brain is made of mush and he’s focused on giving our money away elsewhere.

But this is the insulting view he has and puts out there about Americans to excuse his own failures.

Biden has been trying to demonize the “ultra MAGA” agenda. But Democrats control the legislative and executive branches of government, so it’s no one’s fault but their own. Although Biden even messed up on that, claiming that they control all the branches.

No, Joe, you don’t control the judicial branch, even though you have been trying to intimidate it by encouraging protests against it.

As part of his effort to deflect blame from his failures, Biden has been attacking the tax plan of Sen. Rick Scott (R-FL). However, that isn’t the Republican plan and it isn’t going anywhere. Yet Biden keeps claiming it is what Republicans in Congress want when he knows that’s a lie. Reporters asked him what he thought about Scott calling on him to resign because he wasn’t competent.

Biden’s response was that Scott had a “problem.” Scott obliterated him in reply.

Then came the kicker — Biden couldn’t even get Scott’s state right.

If Biden can’t even get basic things like that right, he’s far gone and unfortunately, he only seems to be getting worse.