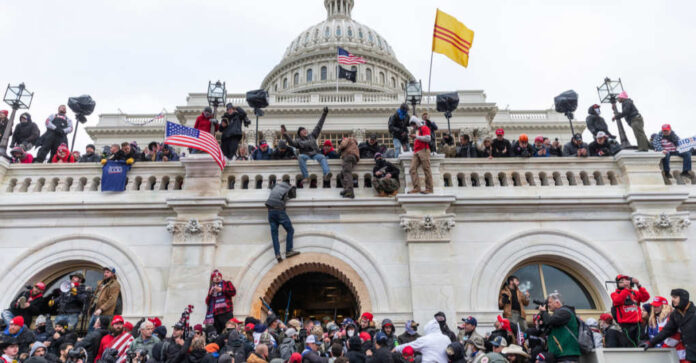 As you know, the Democratic Party has been running quite the kangaroo circus in Washington. For months now, they’ve been “investigating” the events of January 6, 2021, when a protest took place on the Capitol grounds that turned into an incursion of the Capitol building itself.

It has been alleged by those like House Speaker Nancy Pelosi and California Representative Adam Schiff that former President Donald Trump called for such action to take place, including violence. Additionally, they claim it was meant to be some sort of coup or something.

However, so far, no evidence to prove those claims has been found. Yes, some people acted rather brashly and caused some damage, for which there should be consequences. But to say this was an attempt to eradicate those in power or change the status quo? No, I don’t think so.

Nevertheless, the committee set up by Pelosi to investigate these matters continues to bring in people to question and charge.

No doubt, the idea is to get him to say or admit something that could incriminate himself or even Trump. But Giuliani seems to be smarter than your average bear. And so he’s decided to pull his participation in such a circus unless certain demands are met.

Namely, he’s asked that he be allowed to record the “interview,” as they call it. Actually, that’s the only thing he’s asked.

According to Just The News, Giuliani was scheduled to appear before the House’s committee on Friday. And at some point, he had agreed to do so.

However, he backed out of it at the last minute in a wise and rather bold move.

On Thursday, the committee’s spokesman, Tim Mulvey, said that the former mayor had just “informed committee investigators that he wouldn’t show up unless he was permitted to record the interview, which was never an agreed-upon condition.”

Agreed upon or not, it seems to be a wise move.

Giuliani tweeted on Friday that he’d be more than willing to “cooperate” with their games if he were allowed to “videotape” the exchange. After all, you know the committee will be recording the whole thing.

Additionally, it’s not like the group is exactly known for honesty. As Giuliani pointed out, they have, on a number of occasions, released “out-of-context” pieces of the aforementioned tapes of these “interviews,” undoubtedly to add to their biased narrative.

Furthermore, Giuliani, nor really anyone else at this point, is even sure what the committee is supposedly investigating. They say it’s all about the acts of January 6 and what led up to them, but why is it that Schiff keeps bringing up the whole Russia collusion hoax, which has been completely debunked already?

As Giuliani asks, “Would you trust them to be fair?”

The answer for most of us should be a resounding, ‘Hell NO!’

After all, isn’t this the same party that accused the Trump administration of being far too secretive and, therefore, promised that things with them in charge would be different?

It certainly doesn’t seem to be so far. And saying no to having their proceedings recorded only makes it seem like they are hiding even more.

And now, as a result, they’ve lost a rather key witness. Of course, they don’t intend to let Giuliani get away with such a dismissal. As Mulvey said, “Mr. Giuliani is an important witness to the conspiracy to overthrow the government and he remains under subpoena.” Should the former Trump lawyer continue to “refuse to comply,” Mulvey says they will “consider all enforcement options.”

I’m sure they’d love to have to bring him in cuffs before their circus judges.

For now, though, the committee will have to find their so-called proof some other way…