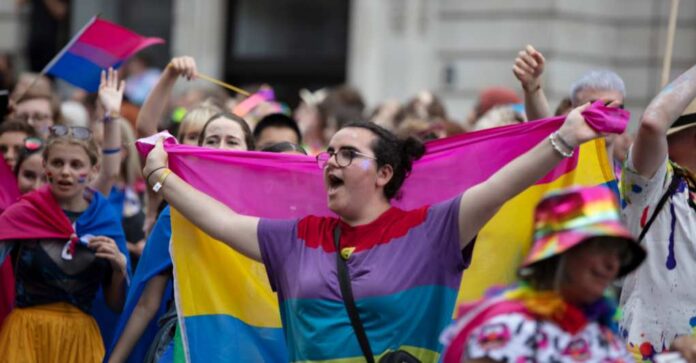 When we were growing up, there were certain topics that were most certainly off-limits in the classroom – including who the teacher was sleeping with. Male, female, it didn’t matter – and it certainly wasn’t up for discussion with middle school students.

It’s not like our generation was sheltered, either. Many of us grew up as key-latch kids. We did what we wanted until the streetlights came on. Movies had curse words in them and were still rated as PG-13. We got to see a lot, and it helped us to be the open-minded people we are today.

However, one teacher in Florida went too far. In the classroom. In front of her middle school students.

The teacher in question is an art teacher who happens to be pansexual.

Someone who is pansexual doesn’t get caught up in gender or biological sex. They don’t limit their sexual interests to one particular gender. They refer to themselves as gender-blind. Essentially, they love who they love.

Being pansexual isn’t a conversation that naturally happens inside of a classroom, let alone an art room with middle schoolers.

Yet, a Florida teacher managed to make it happen – and she was fired over it.

Casey Scott was a first-year art instructor at Cape Coral Middle School. She told local news station WBBH-TV that “A discussion happened in class and because of that, now I’m fired.”

Apparently, she’s never heard of shutting a discussion down before it gets out of hand – and it’s obvious that the discussion that took place with middle school students got way out of hand.

According to Scott, who is married to a man, there was a discussion about how she identifies as pansexual. Considering that the Parental Rights law was in the process of being signed, Scott should have never had any kind of discussion about her sexual preference in the class.

She says that some of the kids in her class identify as “gay, bisexual, and non-binary.” They wanted to create art that allowed them to express their own sexualities.

The simplest thing would have been for her to tell the class “No.” Instead, she decided that it would be okay to let students decide the curriculum.

Less than 1 percent of the population identifies as nonbinary or within the LGBTQ community, so it’s highly unlikely that Scott had multiple students in her class that identifies as such – and if they do actually identify this way, they may need some mental health counseling.

At the very least, Scott shouldn’t have entertained such notions. She should have explained to them that it wasn’t a suitable classroom conversation and moved on to a “safer” art project.

Instead, she let the students create art that represented their sexualities and hung them on the classroom door. That’s when she was contacted by the school administration. They told her to get rid of it all.

She grabbed the students’ flags and artwork and crumpled them in front of them. She was sent home. Later that day, she was informed by Lee School District that she was being released from her teaching contract.

Parents had complained about the artwork as well as the conversation about pansexuality – which is not surprising that parents were in an uproar. It’s not a suitable classroom discussion.

The Teachers Union of Lee County identified that Scott was not a union member and, therefore, could be fired legally without cause.

It’s no wonder that the “Parental Rights in Education” bill was signed. Now, with this law firmly in place, it ensures that “age-appropriate” conversations occur in the classroom. For any teachers who seem confused about that, don’t talk about your sexual preferences in the classroom.