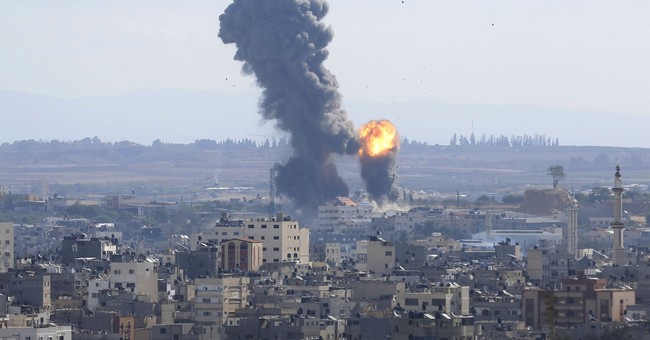 The Biden Administration chose this past week to inform Congress that it would be releasing millions of dollars in US assistance to the Palestinians, as armed clashes between the Israeli Defense Forces and Hamas intensified in the aftermath of Jerusalem Day on Monday.

As the conflict intensifies despite U.S. calls for restraint, the administration notified Congress on Thursday that it will provide $10 million to Palestinian groups in the West Bank and Gaza to support exchange and reconciliation projects with Israelis. The recipients of the aid were not named.

The State Department said Friday that the money is part of more than $100 million that the administration allocated to the Palestinians earlier this year, reversing a near total cutoff in support under former President Donald Trump.

Here is the earlier statement issued by Secretary of State Nod — I mean Blinkin — on the resumption of the aid program announced last month.

The United States is pleased to announce that, working with Congress, we plan to restart U.S. economic, development, and humanitarian assistance for the Palestinian people. This includes $75 million in economic and development assistance in the West Bank and Gaza, $10 million for peacebuilding programs through the U.S. Agency for International Development (USAID), and $150 million in humanitarian assistance for the UN Relief and Works Agency (UNRWA). We are also resuming vital security assistance programs.

Advocates of the funding will no doubt claim that the money is targeted for groups involved in “promoting peace” with Israel, but those last 8 words sort of stick out. Maybe its just more heavy equipment to dig more tunnels and underground air-raid shelters used by Hamas to hide fighters and weapons innocent Palestinians to hide in when IDF jets target military Islamic radicals units trying to hide among innocent Palestinians wanting only to live in peace.

And it’s probably true that Iran doesn’t charge Hamas and Palestinian militants for the rockets and other weapons it provides them to use against Israel, so the funding won’t be needed to pay off the invoices that might otherwise be stacking up in the Hamas business office — or at least were stacking up before the IDF did this earlier, as my colleague Bonchie wrote:

Palestinian militant groups are well-known for paying money to the families of suicide bombers and other “martyrs” for the Palestinian cause. The martyr’s reward comes from Allah, but the monetary reward paid to the martyr’s family keeps food on the table and 7.62 ammo in the AKs.

Not that anything was expected, but the Biden Administration hasn’t made any comment on the question of assisting Israel in funding the replenishment of missiles needed for the operation of the Iron Dome anti-missile system that has been employed with great effectiveness this week against the estimated 1,600 rockets that have been fired from inside Gaza at various targets in Israel.

While the Iron Dome system was largely designed and engineered by Israel’s domestic defense industry, in 2010-2012, the Obama Administration secured significant amounts of funding from Congress to assist Israel with the cost of producing the system. Eventually, US defense contractors became key manufacturers of system components and the US government has now spent close to $1 billion in helping build the various parts of the Iron Dome. The Defense Department purchased two versions of the Iron Dome system for use by the US Army.

Israel has used thousands of missiles in deploying the Iron Dome batteries dozens of times this week, and the resupply of those missiles comes from US Defense Contractor Raytheon.

Maybe Israel should not be as concerned as might otherwise be the case.

Joe Biden’s Secretary of Defense, Ret. Army Gen. Lloyd Austin, was on the Board of Directors of Raytheon at the time of his nomination to be Defense Secretary. I think he’ll take the call.