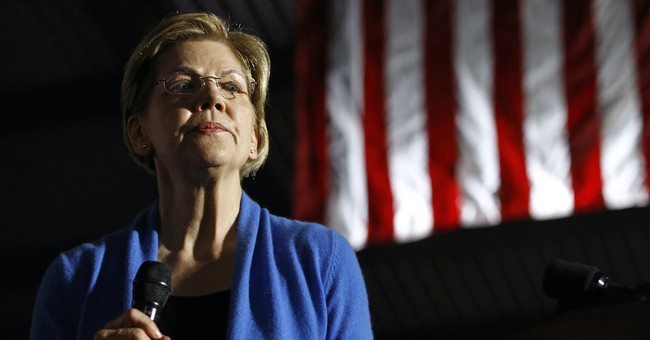 Any conservative worth his or her salt in “Understanding Liberals 101” is aware that the left’s positions and arguments in defense of those positions are not based on facts, data, history, logic, or common sense. Rather, leftism is based solely on pandering and exploitation — always with an eye on the ballot box.

In this case, toss in Democrat socialist Senator Elizabeth Warren (Mass.) — she insists she’s not a socialist — and the needle pegs on cluelessness and irrationality when she’s confronted with facts or logic.

As a result of “all of the above,” it was nolo contendere for Lizzie on Friday when the student debt “forgiveness” advocate was confronted by “The View” guest co-host, conservative journalist Lindsey Granger over what she’d tell people who have already worked hard to pay off their college debts.

Warren went full-metal “deer in the headlights” when Granger — who led with facts — asked, as transcribed by Mediaite (emphasis, mine):

So I want to switch gears a little bit to student loans. I mean, you’ve been fiercely advocating for the president to cancel student loan debts, but really, only 13% of Americans even have federal student loan debt. So is this really the best way to reach most voters?

And also, what do you say to someone like me, who worked two jobs for a decade to pay all their student loans — just finished. Where do I sign up for reimbursement?

Imagine the thoughts in the elitist brain of Warren, who began her career in academia as a lecturer at Rutgers University, Newark School of Law (1977-1978), then moved to the University of Houston Law Center (1978-1983) where she became an associate dean in 1980 and obtained tenure in 1981.

Translation: Like her socialist comrade Bernie Sanders, Warren has never had a “real job” in her life.

So how did Lizzie respond? Like all leftists respond when they’ve just had their asses handed to them; she ignored Granger’s questions and rattled off her rote spiel. [Bracketed “color commentary,” yours truly]:

So let’s start out with who has student loans today. About 40% of the folks with student loans don’t have a college diploma. [And whose fault is that? Dunno, but I do know it’s not hardworking taxpayers or the U.S. Treasury.]

Family had to move somewhere else. And now they earn what a high school grad earns. [By choice or settling.] And they’re trying to pay off college-level debt, and it is crushing their bones. [“Crushing their bones”? Got hyperbole, Lizzie?]

Keep in mind that of those who have student loan debt, more than half have negative wealth. [Again, whose fault is that and whose it it clearly not? They don’t have any wealth. [I don’t wanna sound cold, but again that’s not the fault of hardworking American taxpayers.]

You know, that right now there are tens of thousands of people who are living on Social Security who are having their Social Security checks garnished to pay student loans. And so this for me is a question of fairness. [“Fairness”? For whom?]

There was a time in America when we invested in our public colleges and universities. [Stop it. Leaving taxpayers holding the bag and/or increasing the national debt is not investing, Fauxcahontas. Period.]

That’s how I could go to a college that cost $50 a semester [She’s lying], pay for it on part time jobs. But today, that option is not out there for our young people. [Really? I must be confused in my belief that unfilled job openings reached a record 11.5 million in March.]

So this is about saying, look, it’s tough. [Life has challenges, Lizzie — only liberals think those who are successful should share their success (money) with those who are not.]

Warren never even tried to answer Granger’s questions about what she’d tell people who’ve already paid off their contractually-obligated student debt, or why she’d be more than happy to hand out $2 trillion in taxpayer money to people who want to walk away from theirs.

Is Warren’s inability to grasp life in the real world breathtaking, or what?

Incidentally, also on Friday’s episode of “The View,” as reported by my RedState colleague Jennifer Oliver O’Connell, Granger also took apart co-host Sunny Hostin over her inability to wrap her brain around the notion of Black Republicans and Latino Republicans.

Sometimes — most of the time — the left almost makes it too easy for conservatives. It’s up to us to take advantage of the countless opportunities. That is when conservatives stick to the relevant facts that fly in face of the left’s various narratives, pandering, exploitation, and outright lying. Which is most of the time.

It’s my opinion that a growing percentage of the electorate is at a historical political crossroads, snapped into reality by more than a year of divisiveness — Joe Biden style — and ineptness on a scale unseen in the White House in at least modern history. And worst of all, purposeful crisis after purposeful crisis, all with the singular goal of destroying America as we know it and converting it into a radically-progressive utopia, the likes of which we’ve only begun to see.