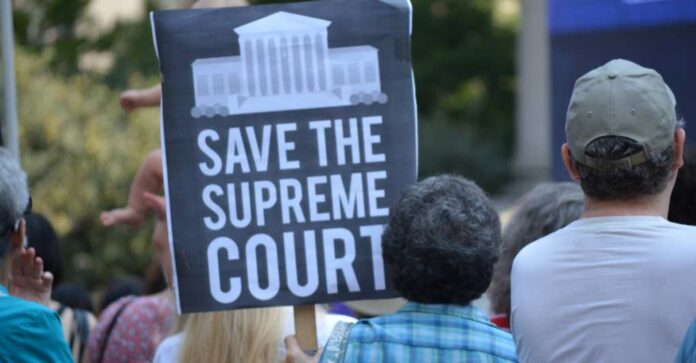 The moment that the draft decision from the Supreme Court was leaked, Ilhan Omar, a progressive Democrat, decided that it was time to pack the Court.

Now, court-packing isn’t a new concept. The Democrats have been trying to do it for years – but only when they’re in power. It’s their way to cheat the system so that they can have more control over who is in the court. They’ve tried to do it in courts on all levels.

The Supreme Court can’t be packed quite as easily. There are nine justices. When one dies or retires, the sitting president has the ability to appoint a new person. As such, there are justices that have been appointed by both Republican and Democratic presidents.

Nine justices ensure that there’s always the ability to break a tie. Sometimes, there are more Democratic-appointed judges. Sometimes, there are more Republican-appointed judges. However, judges are chosen because of their ability to be impartial. Each and every justice has said that they don’t follow the traditional political lines because it would be unfair to do so.

We have seen how the Supreme Court has stayed true to that. There have been anonymous rulings on a number of issues. Sometimes it is a more liberal decision while sometimes it is a more conservative decision. It all depends on the Constitution and the way in which it is interpreted.

That’s not good enough for Ilhan Omar, though. She wants to pack the court full of liberal judges because she believes that it will mean that the Democrats get their way each and every time. She doesn’t realize that judges must be impartial. And, if there’s a slew of retirements in the span of a four-year period, the court could just as easily sway back to being more conservative.

Justice Samuel Alito, a conservative justice who was appointed by George W. Bush in 2005, authored a document that just happened to be leaked. It ruled that the authority regulating abortion would be returned to the people “and their elected representatives.”

This is not acceptable for Omar, who was quick to tweet, “Overturning Roe would put the lives of women across the country at risk. It would fly in the face of decades of precedent and the overwhelming majority of public opinion. And they will not stop here. Expand the court.”

Omar forgets that the only way for Roe to be overturned would be for a majority in the Supreme Court to rule. And, if the court is expanded, it would only maintain a liberal edge for a certain number of years.

Realistically, why should the court be expanded? There have been nine justices since the very beginning.

Biden has already gotten to name one justice after the retirement of Stephen Breyer. And there’s no telling how many others he may get to name naturally over the course of his term.

It’s not as if Biden hasn’t gotten to appoint his fair share of justices to the courts. He’s nominated over 90 individuals to the various courts, including the court of appeals and U.S. district courts.

According to Omar, expanding the court would fix a broken system – and she’s been on this track ever since the confirmation of Judge Amy Coney Barrett in October 2020. She believes that the justices should be represented based on who has been winning popular votes. She tweeted that “Remember that Republicans have lost 6 of the last 7 popular votes, but have appointed 6 of the last 9 justices.”

By that logic, we might as well let only the people in California and New York City appoint our justices.

Nine justices are plenty – it’s always been that way and there’s no sense in changing it simply because the Democrats feel as though they can’t push their liberal agenda through the way it stands as of this moment in time.