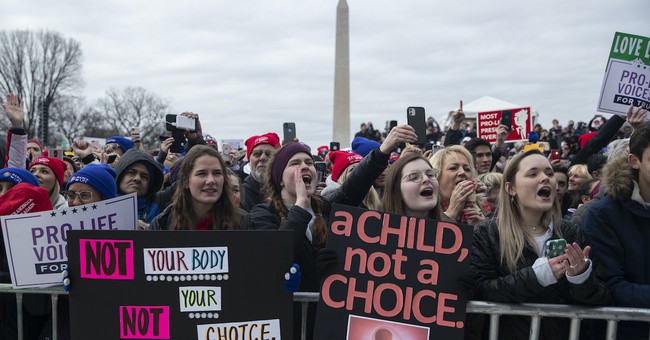 Abortion is front and center in the national dialogue once again, compliments of the leaked draft opinion from the Supreme Court signaling that Roe v. Wade may soon be overturned. Immediately following the announcement, while many were still reeling from the fact of the leak itself, abortion proponents voiced their displeasure with the potential decision and, in some cases, erupted in violence.

We’ve heard from…well, basically every politico of prominence in the days since. In case it wasn’t clear, they are very, VERY angry about this!

If that didn’t convince you (or prompt you to “get [you] a beer”), Vice President Kamala Harris also weighed in. On Tuesday morning, she put out a tweet, attaching her statement on the matter:

Her remarks stood out to me and got me to thinking about the way this debate is almost always framed. It’s women versus men/the patriarchy. Or women, the oppressed minority, standing up and fighting/roaring back. I’ve lost track of the number of “roar”-type posts I saw from women in the pro-choice/pro-abortion camp after this decision.

The premise outright ignores the millions of women who are pro-life, who welcome the overturning of Roe and Casey, and who support legislation restricting — if not outright banning — abortion in their states. I did a quick look-see on the stats.

Per this Gallup Poll, in 2021, 43 percent of women in America self-identified as “pro-life.” In 2020, it was 41 percent; in 2019, 51 percent — a notable high (but also a higher sampling of Republicans/Conservatives than in the following years); in 2018, 47 percent. So, the average for those four years comes to 45.5 percent. And no matter how you slice it, with women making up slightly over half the population, even if only 40 percent of women are pro-life, we’re still talking nearly 50 million women. (Even if one were to draw a distinction between women who consider themselves “pro-life,” yet believe abortion should remain legal under certain circumstances, and those who believe it should be illegal in all circumstances, 19 percent fall into the latter camp.)

That’s a lot of women. But somehow, their voices, their support for life, are utterly discounted in this conversation. It’s as if they — we — don’t exist. But we do. In every state. In some states, we’re in the minority, and that means even if our voices are heard/acknowledged, they’re not enough to get laws restricting abortion enacted. Just as in some states, we’re in the majority, and those women who oppose such legislation won’t get their way. That’s representative democracy in action — and in either case, women have a voice — a vibrant, healthy voice — in it. As Justice Alito’s draft opinion notes, for instance, in Mississippi (from whence the Dobbs case originated), “In the last election of November 2020, women, who make up around 51.5% of the population of Mississippi, constituted 55.5% of the voters who cast ballots.”

Thursday evening, I attended a meeting of Republican women — all of whom are pro-life. My female colleagues here at RedState — pro-life. At NewsTalkSTL, where I’m a regular guest and frequently fill in as a co-host, the women are pro-life. On Wednesday, our guests included Ann Moloney, currently running for Missouri’s House of Representatives in the 114th District — mother of nine, seven of whom have served in the United States military — who gave a powerful testimony for life, as well as Sue Liebel of the Susan B. Anthony List — also a strong woman’s voice for life. Video of the live stream is included below.

Pro-life women exist — no, we don’t just “exist,” we are. We are real. We are strong. We are wise. We are here. In numbers too big to ignore. Funny thing about that song I’ve seen referenced so much of late. It’s 50 years old — one year “older” than Roe. The fifth stanza:

Notice anything interesting? There’s some irony for ya.