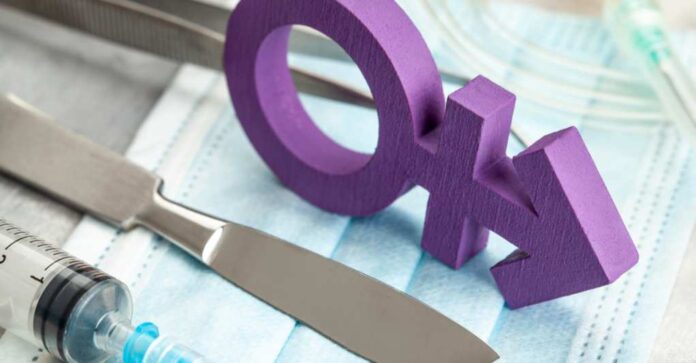 There’s a huge problem happening right now – and liberals are spreading disinformation like wildfires as a way to support their agendas.

Children who are getting confused about their genders are being castrated. Sure, you can call it a gender reassignment surgery, but let’s be honest. It’s castration. And there’s no reversing castration should a child grow up and decide that they actually don’t want to be the new gender that they have chosen for themselves.

Liberals want to listen to 8-year-olds and 10-year-olds and confused high school students who are dealing with bullying and peer pressure in terms of what gender they believe themselves to be.

The idea that the gender you are born with is the gender you will die with has flown out the window. Science is no longer relevant when you listen as nonbinary and transgender individuals take the stage to talk about their rights.

The problem is that they want to drag young kids into it – and they want to make false claims about how ALL doctors agree that “gender-affirming” healthcare is the right answer.

Let’s be clear. Children often get confused. What they want now is not what they want forever. Many kids grew up wanting to be firefighters. Now, they work as teachers, doctors, lawyers, and even politicians. Children change their minds.

Yet, liberals believe that “gender-affirming” care is the way to go. It’s where they accept what gender the child wants to be identified by – and they’ll go to the extreme by offering hormone therapy, puberty blockers, and even sex-reassignment surgery as a way to affirm this new gender.

As Daily Caller reported, “those treatments can leave a child sterile in adulthood.” And, as a study cited by the Florida Health Department points out, up to 80% of gender-questioning youth change their minds about identifying as their non-birth sex.

Imagine the anger that an 18-year-old feels toward their parents when they find out that they can no longer be the male that they were at birth all because they went through a phase at 12 where they thought they would be better off identifying as a female.

And we wonder why suicide is so high among those in the transgender and nonbinary communities?

Rachel Levine, an openly transgender individual who serves as the Assistant Secretary for Health opens their mouth to spread disinformation: “There is no argument among medical professionals – pediatricians, pediatric endocrinologists, adolescent medicine physicians, adolescent psychiatrists, psychologists, etc. – about the value and the importance of gender-affirming care.”

This is a blatant lie. Many believe that there is a significant argument to be had – and some will even go as far as to say that parents should be charged with child abuse by letting a child under the age of 18 go through with such care. This care is irreversible and, therefore, irresponsible.

Levine tries to make their case by saying, “One of the most vulnerable groups of young people are LGBTQI+ youth, and particularly – the focus of many of these issues – trans youth. We need to affirm them. We need to empower them because they are at risk, and they have a very high rate of suicidal thought and we have to act to prevent them from harming themselves.”

What Levine doesn’t want to admit is that many of these youth are confused. Mental health counseling could do them a world of good. Perhaps if we stop affirming their decisions and get them the help they need, they can go on to live normal, productive lives without being spoon-fed the liberal agenda where sex doesn’t matter, and science is tossed right out the window.