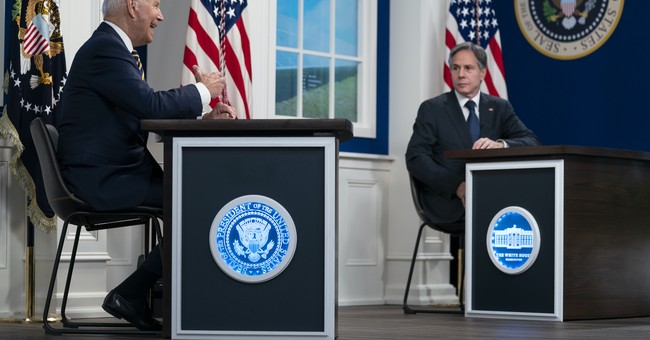 There’s been an intriguing question hanging out there in the wind for months now about Joe Biden and the White House: why did his team create a whole new “stage” in the Eisenhower Executive Office Building next to the West Wing, rather than simply filming him from the Oval Office when he needs to make a statement, like everyone before him?

Now, we did share thoughts on the reasoning, speculating that the reason that they had to set up a stage that way was to accommodate Joe Biden’s significant deficits — that it’s just too hard and not enough space to remake the Oval Office with teleprompters, so that he could see what he’s supposed to say at any given time. So they needed essentially a “reality show” to provide a place where they could stick all those things to help him. Talk about the reality show guy — it wasn’t Trump, it’s Joe Biden. Trump didn’t need such help or such a stage.

That was, I think, a reasonable guess, based on Joe’s obvious issues.

But now, those thoughts have just been confirmed, tucked away in a Politico story about a possible rematch in 2024 between Biden and President Donald Trump — that Biden “permanently” needs a teleprompter. How humiliating is this?

And the White House has largely abandoned using the Oval Office for press events in part because it can’t be permanently equipped with a teleprompter; Biden aides prefer the fake White House stage built in the Old Executive Office Building next door for events, sacrificing some of the power of the historic backdrop in favor of an otherwise sterile room that was outfitted with an easily read teleprompter screen.

So, there it is — they’re admitting that they can’t put all that gear in the Oval Office, and they need constant help for Joe Biden that he can easily read.

We can see it’s a common problem they have when he’s on the road. Biden is constantly squinting and tripping over what it says on the teleprompter, in part because he’s confused, but also in part because he seems unable to see it.

They can only control so much at the White House and then, on the road, it’s more of an issue. And he’s getting worse, so there is only so much they can do.