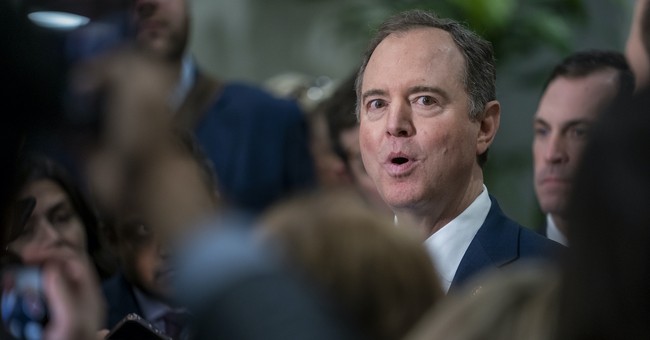 It became common knowledge in Washington, D.C. throughout the four years of former President Donald Trump’s term in office that if there was a leak that on the surface had the potential to damage the Republican agenda and/or Trump’s presidency, then there was a strong likelihood that it came from House Intel Committee Chair Adam Schiff’s office.

Schiff’s tendency to leak like a sieve whenever it suited his purposes was undoubtedly one of Trump’s biggest issues with him and for good reason. Trump would take to the Twitter machine frequently to complain about how Schiff would use his powerful position on the Intel Committee to learn classified or otherwise sensitive info and then either release out of context snippets to the press or fabricate “evidence” out of whole cloth, which the media would then run with in fake “walls are closing in” “is it time for impeachment?” stories like the obedient lapdogs they are.

So it is what that little refresher on “Shifty Adam Schiff” that we turn to his latest frantic call to action in the aftermath of the bombshell news that broke Monday about the SCOTUS leak regarding the draft majority opinion written by Supreme Court Justice Samuel Alito in which he declared “We hold that Roe and Casey must be overruled.”

Because the Democrats have made it clear they’re willing to pull out all the stops, including attempting (again) to nuke the filibuster (which won’t happen), to “codify” Roe v. Wade into law (also won’t happen), as well as possible impeachment of conservative Supreme Court Justices by falsely accusing them of “lying,” Schiff had a wild suggestion of his own (and one that has been thrown around by Democrats over the last couple of years) to add into the mix.

We shouldn’t just codify Roe v. Wade, he wrote. We should also “expand the court”:

“I don’t care how the draft leaked. That’s a sideshow,” he wrote, even though in reality the fact that the draft majority opinion leaked is actually the much bigger story, a major (not to mention dangerous) breach of SCOTUS protocol and tradition that everyone no matter their political party should be condemning.

But he didn’t. Because he’s one who well knows the “benefit” of leaking to the press even while putting on big pretenses about “respecting” American institutions.

In essence, Schiff told on himself here, and former Trump acting DNI Ric Grenell let him know it:

Cliff Sims, whose Twitter bio lists him as “former Deputy Dir. of National Intelligence for Strategy/Comms” and who Grenell has spoken highly of in the past, also called Schiff out:

I think that pretty much says it all.

In addition to being known for leaks, Schiff also is infamous for opening his mouth and inserting his foot in the process, which is what he did last week after he expressed “concerns” to presumptive future Twitter owner Elon Musk about “disinformation” on social media, a laughable claim considering Schiff’s leaks were usually nothing but purposeful disinformation.