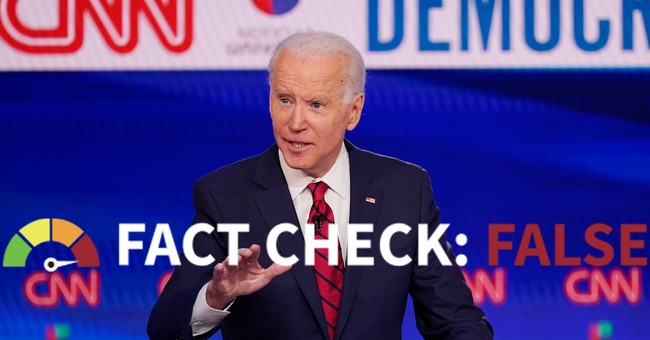 Thank him for giving us a tutorial on how CNN massages the truth to dismiss stories.

Call this a case of a fact-check traveling around the internet before the facts can put their pants on. (Apologies, Sir Winston.) Once again the fact-checking set of this country is engaged in some of their established patterns-holding the GOP to high standards, while completely ignoring the claims made by the administration. For example, Jen Psaki recently insisted that in some states, schools want the ability to segregate LGBTQ students. There has yet to be anything approaching a corrective follow-up from the truth detectors in the press to this bold claim.

Over at CNN, their resident viscount of verite, Daniel Dale, felt he had a relevant piece of coverage that would reflect on Joe Biden’s newly created disinformation division. Needing justification to overlook the Jen Psaki claim, Dale was instead busying himself with a tweet sent out Monday by a GOP representative, using coverage from weeks ago, regarding an issue from the fall of 2021.

Tennessee Rep. Mark Green made a comment about the disinformation board and referenced parents of school children being referred to as terrorists by the Justice Department. Dale saw this message and felt the need to rehash an issue,

Here we have the elements that display the fallacy that is the media ”fact”-checker. Dale resorts to the tactics these verifiers resort to in their effort to mold and massage the news items they choose to cover. In this instance, a verbal technicality is noted, and it becomes extrapolated into a lengthy disqualifying text-all of which is designed to negate the entirety of the story. The end result – any Republican citing said story afterward is then tagged as trafficking in misinformation.

It takes some effort to unravel this blithe dismissal. In April, House Minority Leader Kevin McCarthy was on Fox News and raised the topic of the DOJ labeling parents as ‘terrorists.’ “We’re gonna investigate the attorney general. Why did he go after parents, and call them terrorists, simply because they wanted to go to a school board meeting?” First, there appears some validity.

McCarthy’s claim about the attorney general is just wrong. Garland never called parents terrorists for attending or wanting to attend school board meetings. While the National School Boards Association…sent President Joe Biden a letter in September arguing that “acts of malice, violence, and threats against public school officials” could be classified as “the equivalent to a form of domestic terrorism and hate crimes” and suggesting that the Patriot Act could be used against perpetrators, Garland himself never endorsed the “domestic terrorism” language or the deployment of the Patriot Act on this subject.

So, Garland never said the actual words, but Dale does attest that the specter of the terrorist was raised. This is an important detail, as we will see, and it undermines the attempt to dismiss this story outright. Last October, the Associated Press tried to claim that the NSBA never tried to call parents at school board meetings terrorists – even as it presented the very proof that the NSBA did that very thing.

AP’S ASSESSMENT: False. The organization is not asking Biden to label parents who protest at school board meetings as terrorists. The NSBA asked the administration to do an interagency investigation of threats of violence against school board members and said the threats “could be the equivalent to a form of domestic terrorism and hate crimes.”

Huh?! They aren’t asking to label them, they asked to investigate in order to label them…it seems…we have to guess…?

In that letter – which has since been taken down by the NSBA after issuing apologies, even though the AP says they had no reason to apologize – the national group labeled a number of non-violent examples at school board meetings across the country as qualifying as violence, and as domestic terrorism. I excerpted many entries from that letter at the time, and they called for President Biden to use a wide array of governmental authority; the DOJ, the Patriot Act, the Hate Crimes Act, Violent Interference with Federally Protected Rights statute, the Conspiracy Against Rights statute, the US Postal Inspection Service, and even a presidential executive order.

This letter could be excused as an overreaction by a lone entity. Except it was revealed that just ahead of sending the letter on September 29, the NSBA had been in regular contact with the Biden administration. Emails showed that portions of that letter were shared with the administration, and they declared they would be asking for federal authority assistance.

This has all the earmarks of the administration colluding with the NSBA – write us the letter, we’ll pass it over to the DOJ, and we’ll send in the needed authority. The problem became the public outcry of parents becoming classified as domestic terrorists.

Okay, but this does not mean that U.S. Attorney General Merrick Garland ever called parents terrorist, true. However…The DOJ did respond to this letter. CNN tries to say that since the actual words do not appear in documents, there was not recognition of the claim made by the NSBA.

But whatever the merits or flaws of Garland’s memo, the reality is that it simply did not say anything at all about “domestic terrorism” or the Patriot Act — much less use the word “terrorists” to describe parents who merely wanted to attend school board meetings, as McCarthy falsely claimed Garland had done.

That memorandum from AG Merrick Garland was issued on Monday, October 4, and this was followed up by an official release from the DOJ that afternoon, just days following the NSBA letter being sent. In that response letter, the DOJ listed a number of its divisions tabbed with protecting school board meetings, with one revealing entry.

Now understand, Daniel Dale and other fact-checkers hang onto the fact AG Garland never called parents terrorists, yet here is his DOJ sending out domestic terror agents following the letter, alleging parents acted as domestic terrorists. Garland even confirmed that the DOJ and the White House met about the NSBA letter, just before the memo and the official statement came out. Everybody was on board, and everyone was on the same page.

It was in the following days that an upswell of public opposition was realized, and Garland then softened his position and had to state parents were not terrorists. Daniel Dale notes this comment from Garland, but omits that it was spoken to Congress nearly three weeks after he was dispatching anti-terrorist agents. Prior however, the domestic terror threat had been recognized and accepted by all the involved entities.

This is the problem with the fact-check adjunct in our media complex. It takes this much work to unravel the bias and journalistic sloth that is involved in their games. And these same manipulators are comfortable with Biden forming a disinformation division – probably because they can be tabbed as experts on the matter.