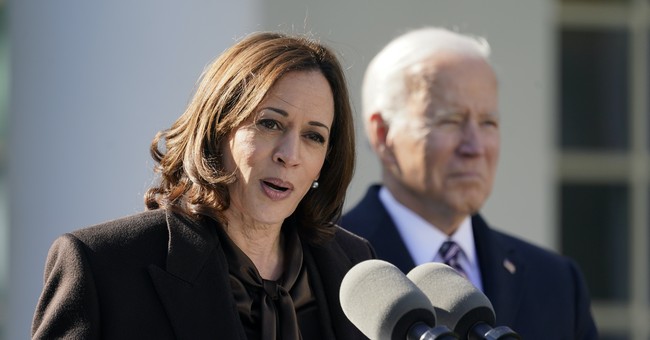 The tensions between Joe Biden and Kamala Harris have been extensively chronicled over the last year. While they put on happy faces when they are together, it’s been revealed that Jill Biden never wanted Harris on the ticket. Further, reports have shown that the vice president’s camp has gone so far as to accuse the White House of racism. There are multiple other examples.

Early in April, Vice President KAMALA HARRIS’ office began collaborating with the White House on a social media video to promote the administration’s extension of its pause on federal student loan payments.

Harris’ office then decided against it, according to two White House officials familiar with the matter…

…Privately, Harris has advocated for additional loan forgiveness. One White House source said her office seemed initially eager to participate in the administration’s public dialogue around student loans. But conscious of progressives pushing Biden to unilaterally cancel tens of thousands of dollars in student debt and that Biden is resisting such lobbying, the vice president has been increasingly wary of becoming part of the public face of the administration’s response.

The delicate politics reflects the broader divisions within the administration over student debt relief, a debate that goes all the way to the top.

I find this incredible for two reasons.

One, it’s extremely odd to see a president so not in control of his own administration that the vice president can just refuse to participate in a major policy push. Who is actually in charge here? It sure doesn’t seem to be Joe Biden, and it’s possible that his far-left handlers actually sympathized with Harris here, allowing her to get away with ducking out.

An administration that is not on the same page on something this simple is not normal. Besides, on what planet is canceling $10,000 of student debt for the wealthy and those with high-income potential by milking working Americans not a progressive policy?

And that leads me to my next point. Harris is already deeply unliked by the American people. She consistently has one of the lowest favorable ratings in the country of any major politician. That includes Joe Biden, who himself is dancing around in the very low 40s on approval. Every poll I’ve seen has her getting clocked by Donald Trump (and just about anyone else) in 2024, given she’s the presumptive Democrat nominee. You’d think her abject failure as a vice president would bring about some introspection on how to change that dynamic.

Instead, she’s running further to the left? How is that supposed to help her reach a broader share of the electorate? The answer is that it won’t, and it shows just how horrible Harris’ political instincts are. She does not need to appease the far-left at this point. They are going to trip over themselves to vote for her no matter what. She needs to adjust her appeal, whether we are talking policy or her often cringe public performances.

But hey, if she wants to keep running toward the cliff, who am I to tell her to stop? Harris somehow manages to make Hillary Clinton seem capable, and if the vice president wants to fully play into that, go ahead.