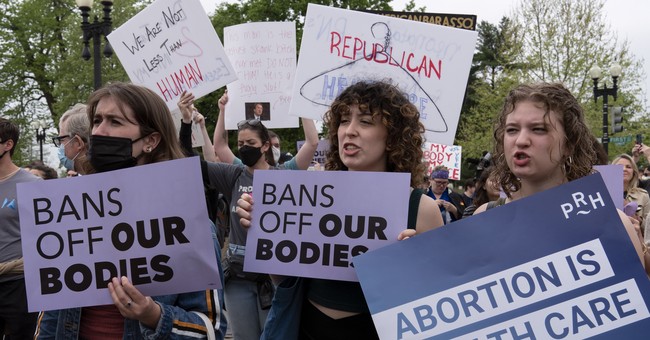 We’ve been reliably informed since 2016 that if a candidate for public office wouldn’t go on record as saying they’d accept the results of an election as legitimate, then they were a “threat to democracy” and were “undermining our sacred institutions” or whatever.

Then-Democratic nominee for president Hillary Clinton said as much in so many words throughout the latter part of her 2016 battle with then-GOP nominee Donald Trump for the presidency, especially after Trump was questioned on the issue during one of their debates and didn’t give a definitive answer on whether or not he would.

Fascinatingly, it was Hillary Clinton herself who spent the four years after Trump defeated her in November 2016 proclaiming the election was “stolen” from her as part of a vast conspiracy between Trump and Russia that, as it turned out, was a massive Democrat-funded hoax perpetrated to a large extent by high-profile players in the Clinton for President campaign.

At one point in 2020, Clinton even urged Democratic presidential nominee Joe Biden to refuse to concede the election “under any circumstances” – even in the event it looked like he was going to lose. In late 2019, Clinton called Trump an “illegitimate president” and suggested with a serious face that she knew she could beat Trump “again” if she ran for president one more time.

But after the 2020 presidential election when Trump and his legal team aggressively began challenging election results, and then later after the Capitol riot happened, we were once again treated to incessant lectures about “undermining democracy/our institutions” as well as allegations that Trump deliberately “incited” the rioters who breached the Capitol building. The latter, in part, was the basis for the Democrats’ campaign to impeach Trump as he was preparing to leave office.

With that in mind, and though it shouldn’t be surprising to anyone familiar with the Democrats’ shamelessly duplicitous machinations, we turn to a question White House press secretary Jen Psaki fielded during the daily press briefing Wednesday where she was asked if the Biden White House would view the Supreme Court potentially striking down Roe v. Wade as “legitimate.”

Psaki’s response was to not answer the question directly at all. She didn’t say “no.” She didn’t say “yes.” Instead, she alleged things would take a dire turn for women in at least “half” the states in America in response to the possible ruling and then later lied in suggesting that “we don’t know the validity” of the leaked SCOTUS draft majority opinion even though Chief Justice John Roberts confirmed the authenticity of the document in a statement released Tuesday.

Isn’t it amazing how they can go from “you’re undermining our institutions!” and “inciting insurrections!” when Republicans have questions about election results or court rulings when it suits their (Democrats’) purposes but yet when they refuse to acknowledge something as legitimate – especially a potential ruling of this magnitude – it’s Different(TM) and somehow acceptable?

Not that I ever want to hear a pious, hypocritical lecture from Democrats on anything, but after this week they’ve proven beyond a shadow of a doubt that if they didn’t have double standards then they’d have no standards at all. What Democrats are doing here is way different from what Republicans did in questioning the 2020 election results. These people are beyond shameless and know exactly what they’re doing in forging a dangerous path to the point it could inspire someone or some group to do something that would have terrifying consequences. In fact, we’re already seeing violence in the streets.

What’s to come next from the radical left in response to Democrat “leaders” whipping up their outrage mobs into dangerous frenzies in telling them to “fight like hell“? I shudder to think.